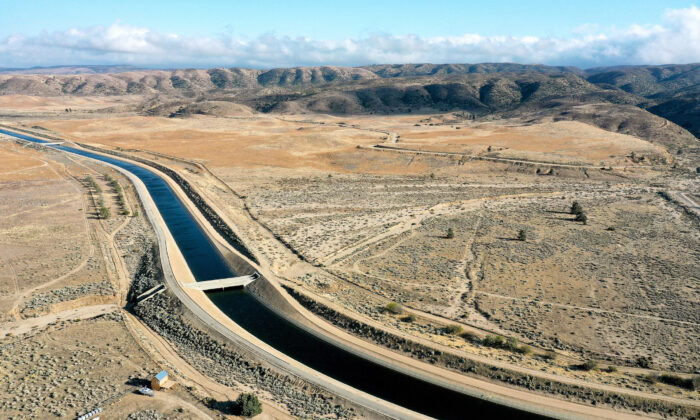 An aerial view of the California Aqueduct as it runs through the western Mojave Desert near Lancaster, Calif., on April 21, 2021. (Mario Tama/Getty Images)
Northern California

Gomberg resigned July 16 after criticizing his colleagues at the State Water Resources Control Board, alleging the board has taken the middle ground between environmental advocates and industry and failed to take actions against the status quo.

He criticized the state for not doing enough on greenhouse gas emissions, housing construction, and reducing agriculture to save water, as well as trimming law enforcement and corresponding budgets to reallocate those funds to “actually increase public health and safety.”

“Witnessing the agency’s inability to tackle big challenges nearly eviscerated by this Administration has been gut wrenching,” Gomberg wrote. “The way some of you have simply rolled over and accepted this has been difficult to watch.”

The water board sets statewide water quality policy and implements the Clean Water Act—a federal law that addresses water pollution—in California. The board regulates about 7,400 drinking water systems in the state and disburses federal and state assistance.

On his way out, Gomberg called on other board staff to fight against “industry” and “status-quo defenders.”

“Raise your voice, express dissent, organize together, and use all of the tools at your disposal,” he wrote.

He also criticized his colleagues for not engaging in more conflict, but he said he was encouraged by their commitment to racial equity.

In response to Gomberg’s allegations, Erin Mellon, communications director for Newsom’s office, told The Epoch Times the governor has prioritized several water initiatives and is “doing more here [in California] than in any other state to adapt to our changing climate.”

When he first took office, Newsom and the Legislature invested $8 billion in the Water Resilience Portfolio, a comprehensive plan that focuses on “diversifying our water supplies, enhancing ecosystems, improving infrastructure and ensuring California is better able to manage hotter and drier weather,” Mellon said.

Joaquin Esquivel, the water board’s executive director told The Epoch Times that the board has taken unprecedented, bold, and real-time regulatory actions in response to the state’s drought emergency, including implementing the broadest water rights curtailments in history.

“I stand by the incredible dedication and progress that our staff brings to work every day because they care deeply about protecting our environment in service to Californians, even amid the many challenges the state faces, including climate change and drought,” Esquivel said.

Gomberg’s resignation followed a scathing audit report of the board this month by Acting State Auditor Michael Tilden, who criticized the agency for a lack of urgency in helping nearly a million residents affected by failing water systems with the available state funds.

“Nearly a million Californians face possible long-term, negative health outcomes—including an increased risk of liver and kidney problems, as well as cancer—because they receive unsafe drinking water from a failing water system,” Tilden wrote in a letter to the governor and legislators.

State Water Board Executive Director Eileen Sobeck pushed back in a letter to the auditor’s office, citing difficulty implementing a new safe-drinking water program during the COVID-19 pandemic.

Gomberg did not return a request for comment and is now an independent consultant, according to his LinkedIn page.