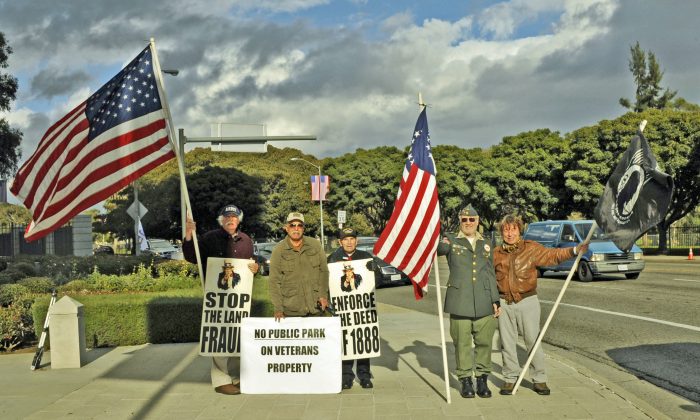 Veterans in Southern California noted some years ago that the Veterans Home in West Los Angeles was filling unused buildings with private and commercial enterprises and allowing a local community nonprofit to replace a dilapidated chain link fence with a very appealing perimeter ironwork and pillar wall system on Wilshire Boulevard and San Vicente Boulevard, which leads to Brentwood.

The VA also leased 16 acres of the Veterans Home site for at least 20 years to this same nonprofit, which developed a public park on land restricted for veterans’ medical services and supportive housing.

After some 15 years, nonveteran entities now occupy nearly one-third of the California Veterans Home Campus. Thirteen sites were noted in the lawsuit, 11 of which were declared illegal agreements. The other two agreements were recently terminated.

The VA was making agreements for the use of Veterans Home property to various parties to improve its operating income. The judge noted that the VA failed to follow a requirement that income could only be made by a sharing agreement with other entities for veterans’ medical services on the Veterans Home Campus.

The court deferred the enforcement of the judgment with respect to the 11 affected agreements pending the resolution of any appeal, or, if no party appeals, for 180 days from Aug. 30.

Vietnam veteran Robert Rosebrock was delighted after five years of protesting with a group of veterans on Wilshire Boulevard every Sunday to publicly expose the problems at the Los Angeles VA.

“Judge Otero ordered a summary judgment against the VA for entering into so-called sharing agreements with third parties for non-veteran use. His order was brief and explicit—these agreements are unauthorized by law, and therefore void.”

“The notion that the VA should lease this property to help fund medical services for our veterans is as preposterous as leasing the front lawn of the White House to help pay secret service police to protect our commander-in-chief, or to lease the grounds and facilities of our military bases to help finance our troops to defend our nation,” said Rosebrock.

One of those affected is the UCLA sports program, which has operated the Jackie Robinson Stadium, a baseball field, on the VA Home Campus.

Dan Guererro, the UCLA athletic director, posted a statement on the Bruins website Aug. 30, “For the past 50 years, UCLA has operated Jackie Robinson Stadium on the property and, although UCLA is not a party to the lawsuit, we have been monitoring this case.”

Guererro said he needs to find an alternative for the Bruins baseball team in the very near future.

One LA Times reader, with the online signature Rosen11, left this comment [http://www.latimes.com/local/lanow/la-me-ln-va-campus-20130829,0,228763.story] regarding the LA Times article on Guererro’s statement:

“UCLA baseball has made it clear it does not want veterans ‘intermingling’ with its baseball fans by making veterans sit in the ‘nosebleed’ seats during the regular season. Further, no seats are allocated to veterans for playoff games—which is sickening.”

“Additionally, veterans are no[t] allowed to go to the softball/soccer field—created for them!—because of these private leases with outside entities.”