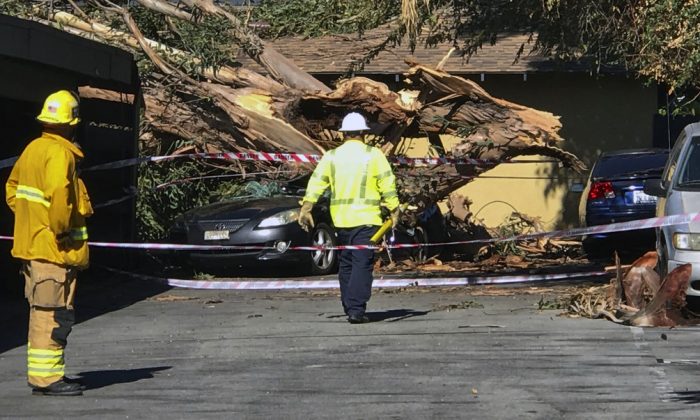 Authorities access the damage after a woman was killed after a large eucalyptus tree toppled and smashed onto a car she was inside of in the driveway of her home in TUSTIN, Calif. during the heavy Santa Ana winds on Oct. 15, 2018. (Mindy Schauer/The Orange County Register via AP)
Crime and Incidents

Pacific Gas & Electric for the first time began cutting power on the night of Oct. 14 to tens of thousands of customers in Northern California after the National Weather Service warned of extreme fire danger across the state due to high winds, low humidity and dry vegetation.

San Diego Gas & Electric followed suit on Oct. 15, turning off power to about 360 customers in foothill areas near Cleveland National Forest, where multiple blazes have scorched large swaths of land in recent years.

SDG&E has pre-emptively shut off power to customers in the past, most recently in December when 14,000 customers went without power — many for four days.

Pacific Gas & Electric previously announced its plan to shut off power preemptively after authorities blamed its power lines for sparking some of California’s most destructive wildfires.

The utility expects to pay billions of dollars in wildfire damages and has sought ways to limit its liability through the courts and Legislature.

PG&E said about 87,000 customers had their power halted and more could be left in the dark depending on the weather. Some 60,000 customers remained without power. Schools in those affected areas canceled classes.

PG&E said it expected to restore power on the night of Oct. 15 to most customers—though some residents won’t get electricity back until Oct. 16.

“We know how much our customers rely on electric service, and we have made the decision to turn off power as a last resort given the extreme fire danger conditions these communities are experiencing,” PG&E spokesman Pat Hogan said.

PG&E said it began notifying affected customers on Oct. 13 about possible outages. However, many said on Oct. 15 they had received little or no notice.

Stewart Munnerlyn was scrambling to find generators to save $8,000 worth of ice cream at his creamery shop in Pine Grove, about 55 miles (89 kilometers) east of Sacramento. Munnerlyn said he is in Virginia visiting a sick relative and received three text messages on the night of Oct. 14 from PG&E saying it might cut power, but he didn’t know it actually happened until a friend called him.

“They knew what they were going to do obviously,” Munnerlyn said. “We weren’t given enough notice to properly prepare.”

Kevin Kathman, executive chef of wine country restaurant All Seasons in Calistoga, said $12,000 worth of food at the site would spoil if power isn’t restored soon.

Instead of tossing it, he was planning to cook over a fire during a block party for the “stressed out community” that includes winery owners in the middle of grape harvest. The power went out on the night of Oct. 14 and Calistoga remained without electricity Oct. 15, even though Kathman said there was no wind.

“It’s a beautiful day,” he said. “We are all in disbelief that it’s not back on.”

PG&E spokeswoman Melissa Subottin said power was also cut to hospitals and other medical providers that are required to have backup power sources. PG&E officials visited 4,400 medical customers in the affected areas to personally warn them of the outages, she said.

The weather service predicted winds gusting to 55 mph (89 kph) in the Sierra foothills east of Sacramento. High winds were also expected in the state’s wine country north of San Francisco.

Southern California Edison said it was considering shutting off power to an undetermined number of customers. Strong wind gusts swept across the region with the arrival of the first fall Santa Ana winds — hot, sustained gusts that blow from the desert to the ocean.

A motorist in the Orange County city of Tustin was killed when a eucalyptus tree fell on her car in an apartment complex. The victim was 34. No further details were released.

Southern California Edison spokesman David Song said about 32,000 of its 5 million customers were experiencing power outages, but no shutdowns had been ordered by the utility. Song said Edison was investigating the cause of those outages.