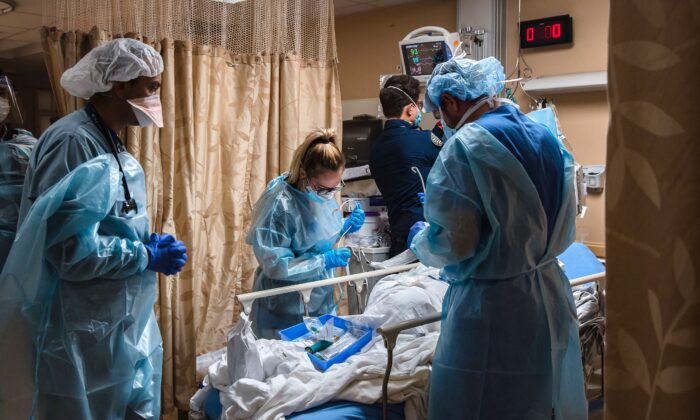 The Health and Appropriations committees of the California Assembly voted to move forward with a mandatory $400 billion “comprehensive universal single-payer health care coverage” plan for all California residents.

The Appropriations Committee passed the bill without discussion.

“If the Appropriations Committee isn’t going to review the fiscal matters of a bill, what is the purpose of this committee?” asked Republican Assemblyman Vince Fong of Bakersfield, a committee member.

The last and only study regarding the cost of single payer in California was prepared in May 2017.

Assemblyman Fong could have added that a homeowner would be unwilling to rely on a single 2017 study to purchase something as inconsequential as a new garage door opener.

The very, very earliest single payer could be in place would likely be 2026. With an annual four percent inflation rate since 2017, the California universal single payer plan based on that single 2017 study would cost $7.7 trillion dollars during its first 10 years. If the original estimates were off by 20 percent, the cost would be over $9.0 trillion for its first decade.

Assuming the federal government would provide California with 100 percent of all Medicare and Medicaid funds, the state would have $400 billion to operate its single payer program.

The California Assembly committees also proposed that the legislature would have the unfettered and a never-ending ability to increase the proposed $163 billion of new taxes.

There are many, many additional studies that a responsible legislature would want to authorize and review, before going forward with a project that could consume $7 to $9 trillion dollars in its first decade. These new studies should include, but not be limited to:

Citizens must be concerned as to whether the State of California has the capability of implementing a plan the scope of single payer.

California single payer calls for $163 billion of new California taxes. If the combination of these new taxes, plus the funds provided by the federal government, are insufficient, the California legislature by majority vote would have the right to increase the proposed taxes without limitation to either rate or allocation. Hence, new taxes of $163 billion per year would likely be only a starting point.

The proposed $163 billion in new taxes would result from (1) a 2.3 percent tax on gross receipts for companies with an excess of $2 million in gross sales, (2) a 1.25 percent payroll tax on employers with over 49 employees and (3) increases in individual tax rates for anyone having taxable income over $149,509.

The proposed increases to tax rates for all California taxpayers with taxable income in excess of $149,509 would result in the highest tax rates in the United States.

With these new California taxes, the 1.45 percent federal Medicare tax on both employees and employers would remain in place. Every working individual would pay the existing Medicare tax along with the new proposed taxes.

Medicare and Medi-Cal recipients are designated by federal law.  Whether the federal government can, should and/or would allow California to receive well over $200 billion annually of federal money, without precise assurance that the money would go to those who are entitled to it under federal law, is an interesting question. It is safe to assume that litigation would be filed to stop the federal government from abandoning their legal responsibilities to ensure that senior citizens receive the benefits of what they have invested in for their entire working lives.

The reality is that the Health and Appropriations committees of the California Assembly do not have nearly the information needed to make an informed decision regarding moving forward, or abandoning the notion of a California single payer health system.