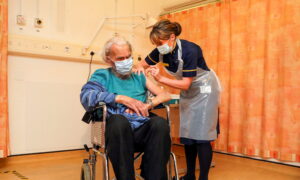 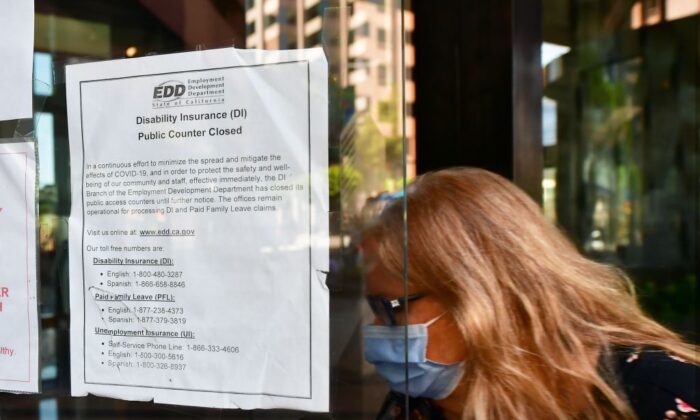 A woman wearing a face mask enters a building where the Employment Development Department (EDD) has its offices in Los Angeles, on May 4, 2020. (Frederic J. Brown/AFP via Getty Images)
NY-Cal

A security firm investigating California’s fraudulent pandemic unemployment claims warned that the scope of the fraud could be more than twice as much as previously estimated.

At least 10 percent of unemployment claims before the state Employment Development Department (EDD) installed controls last October may have been fraudulent, according to Blake Hall, founder and chief executive of the company ID.me., the Los Angeles Times reported. Hall’s company was hired by the EDD in October and has blocked nearly 470,000 phony claims since.

Hall told the LA Times that the amount of fraudulent payout between March and September 2020 might reach $9.8 billion. The EDD has sent out $113 billion in unemployment benefits since March, when the CCP virus pandemic hit California.

He added that a lot of those funds went to foreign crime organizations that filed unemployment claims with stolen identity information, and used “money mules” in the United States to pick up benefit debit cards sent out by the EDD.

“When the Russians and the Nigerians and the Chinese are the players on the field, they are going to put up some points,” Hall said. “This is a very sophisticated cyberattack that’s being run at scale.”

It was previously estimated that the EDD paid up to $4 billion to fraudsters, including a Sacramento-area woman, who previously worked for the EDD and collected $21,000 in unemployment benefits using the name and Social Security number of Democratic Sen. Dianne Feinstein. The scam wasn’t exposed until Bank of America, which administers the EDD’s benefit debit cards, flagged the unemployment claims made in the senator’s name.

In addition, hundreds of millions of dollars in unemployment benefits went to prison and jail inmates, many of whom weren’t held in California, according to a law enforcement task force led by district attorneys.

“The volume of fraud as well as the types of inmates involved is staggering,” the district attorneys wrote in a letter (pdf) to Gov. Gavin Newsom. They added that inmates on death row, those serving life sentences and life without possibility of parole, rapists, child molesters, human traffickers, and other violent criminals, were receiving unemployment checks, and that many of those checks were sent out of state.

According to a December analysis obtained by the LA Times, more than 2,000 claims deemed to be at high or moderate risk of fraud were from inmates of the Florida Department of Corrections or county jails in that state. Overall, the report estimates that some $42 million in claims went to out-of-state prison and jail inmates.