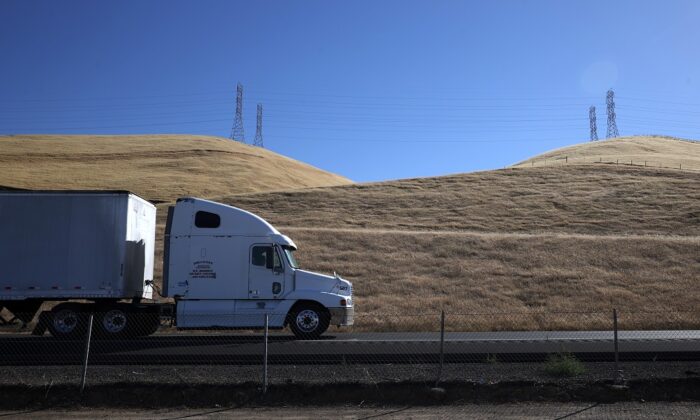 A truck drives by hills covered in dry grass along Highway 5 in Los Banos, Calif., on May 25, 2021. (Justin Sullivan/Getty Images)
Judiciary

Independent truckers say the California law known as AB5, which took effect Jan. 1, 2020, will kill their industry by preventing companies from hiring them.

The law was temporarily enjoined as to motor carriers by U.S. District Judge Roger T. Benitez of the Southern District of California the day before it took effect, as The Epoch Times previously reported. That injunction has been left in place temporarily by a federal appeals court.

The statute, which was pushed by organized labor to crack down on the hard-to-unionize so-called gig economy represented by companies such as Uber and Lyft, was enacted ostensibly to help workers by preventing their “misclassification.”

It adopts the so-called “ABC” test to determine employee status, according to the labor union-funded Economic Policy Institute (EPI). The test stipulates that workers may only be considered independent contractors when a business proves the workers “a. Are free from control and direction by the hiring company; b. Perform work outside the usual course of business of the hiring entity; and c. Are independently established in that trade, occupation, or business.”

The case is California Trucking Association Inc. v. Bonta, court file 21-194. The appeal, which challenges a ruling from earlier this year by the U.S. Court of Appeals for the 9th Circuit, was docketed by the Supreme Court on Aug. 11. Rob Bonta, a Democrat, is the attorney general of California.

There are hundreds of thousands of owner-operators in the United States, and they play an outsized role in the trucking industry, according to the petition filed with the Supreme Court.

The owner-operator business model is central to the operation of the trucking industry because it allows motor carriers to efficiently satisfy fluctuating demand for trucking services. The model has allowed motor carriers “to expand without major capital investment, making it possible for them [to] bid on jobs that require multiple trucks and to provide those services through subcontractors or by themselves acquiring additional trucks and hiring employee drivers.”

As part of a deregulatory trend that began in 1980, in 1994 Congress approved the Federal Aviation Administration Authorization Act (FAAAA) “to ensure that the States would not undo federal deregulation with regulation of their own,” and avoid “a patchwork of state service-determining laws, rules, and regulations,” the petition stated, citing the Supreme Court’s 2008 ruling in Rowe v. New Hampshire Motor Transportation Association. The FAAAA preempts state laws “related to a price, route, or service, of any motor carrier.”

In a 1994 report, Congress recognized that “the sheer diversity” of state regulatory schemes presented “a huge problem for national and regional carriers attempting to conduct a standard way of doing business,” and found later that state regulation of the trucking industry “imposed an unreasonable burden on interstate commerce” that “impeded the free flow of trade, traffic, and transportation of interstate commerce.”

The California Trucking Association argues that the 9th Circuit Court of Appeals was wrong to reject its challenge to AB5, which it says makes it essentially impossible for motor carriers to continue giving work to independent owner-operators.

“The 9th Circuit’s holding should not stand,” the association states in the petition.

“It creates a conflict in the circuits. It rests on a construction of the Federal Aviation Administration Authorization Act of 1994 that departs both from the statutory language and from this court’s approach. It will cause dis-uniformity in national commerce while disrupting the operations both of motor carriers and of owner-operators. And it interferes with the routes, services and prices of motor carriers — just what Congress meant the FAAAA to prevent.”

Bonta’s press office said, “We’re reviewing the petition. At the California Department of Justice, we’ll continue to defend laws that are designed to protect workers and ensure fair labor and business practices.”