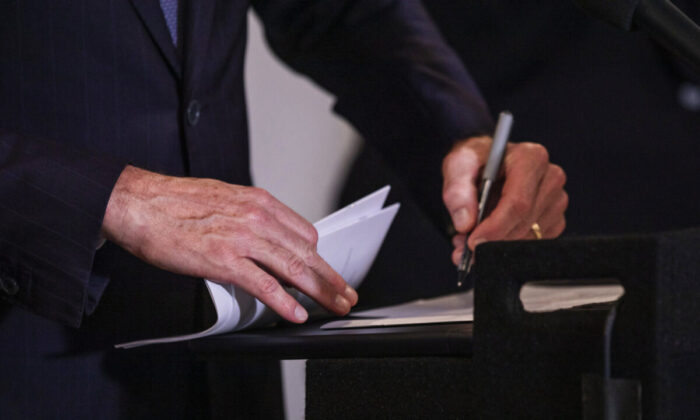 SACRAMENTO, Calif.—In a deal between Gov. Gavin Newsom and state lawmakers, California is expected to pass another mandatory COVID-19 paid sick leave package for businesses with more than 26 employees, retroactive to Jan. 1. 2022.

Senate Bill 114 passed the state Assembly on Feb. 7, while a mirror version of the legislation, Assembly Bill 84, is making its way through the state Senate.

The proposed framework—authored by the governor, Senate President Pro Tem Toni G. Atkins, and Assembly Speaker Anthony Rendon—will provide up to 80 hours of paid sick leave for all COVID-19 related work absences for full-time employees. Part-time employees will be granted paid sick leave based on the median hours they’ve worked in a typical work week.

The bill also allocates $1.9 billion to California’s COVID-19 emergency fund, with $1.6 billion that will go toward the Department of Public Health for contact tracing, vaccinations, testing, and other COVID-19 related responses.

Several groups called into the state Assembly’s informational budget committee hearing on Feb. 7 in both praise and critique of the proposal that would run through September. Proponents of the bill—largely made up of labor unions—argue it will bring relief for workers and their families who contract COVID-19 while also mitigating the spread by keeping workers at home.

Meanwhile, opponents say this will burden the state’s businesses without an adequate plan to aid them as they recover from the effects of the pandemic shutdown.

“It is a massive new cost that is heaped upon already uncertain job creators in California,” John Kabateck—state director of the National Federation of Independent Business, a nonprofit advocacy group for small and independent businesses—told The Epoch Times. “And it’s important to point out that it not just cost but it’s more recording requirements and opens the door to liability for small businesses.”

One of those industries became particularly battered during the pandemic, according to California Restaurant Association Senior Legislative Director Katie Hansen.

The state’s food sector bore the weight of many of the dining restrictions for more than a year during the state shutdown which was first enacted in March 2020, Hansen said, adding that the added cost of extended paid sick leave is another layer to overcome before restaurants can fully rebound.

Hansen said during public comment that “restaurants were the first to be closed during the pandemic and will be the last to recover” from the financial impact of the COVID-19 state restrictions on indoor and outdoor dining.

“A spike in cost of labor, food, and supplies, as well as any debt the business may have incurred from the pandemic; so any additional cost increases will impact a restaurant’s ability to recover,” she said.

The restaurant association—a 23-member advocacy group for the state’s restaurants—reported last year that a third of California’s restaurants had permanently shut down due to the state’s restrictions on indoor and outdoor dining. Prior to the pandemic, the state had 76,000 eateries and beverage establishments employing close to 2 million people.

The state first enacted the COVID-19 paid sick leave program at the height of the pandemic in April 2020 for workers sick with COVID-19 in the food sector, then extended it to all employees in businesses with more than 500 employees beginning in September 2020. Both programs expired in December 2020, but by March 2021 the program was rekindled and retroactive to Jan. 1, 2021.

“We have concerns in some of the language contained in this measure that creates even more administrative burdens and cost to public employers,” Pina said during public comment.

Though the new proposal—Senate Bill 114—contains identical language to the previous versions, it has a few new caveats. First, there’s currently no framework provided for employers to receive state tax credits, so they will have to fully fund the paid sick leave unless the state adopts the federal tax credits program that was available last year.

Not only does this variation of paid sick leave cover employees who fall ill with COVID-19, but it provides an additional 40 hours if a member in their household gets sick, too. However, they must provide documentation of a positive test to the employer. Without a positive test for themselves or a family member, the employer isn’t required to grant the paid sick leave.

In addition to the COVID-19 paid sick leave package, workers are also qualified for any paid sick leave available under the Healthy Workplaces, Healthy Families Act passed in 2014.

Workers who have appointments to receive any of the vaccines or booster shots are eligible for the proposed paid sick leave. If they have side effects from the injections, that is also covered in the amended language of the bill.

Employers are also required to pay for the employees’ COVID-19 test, but it’s not clear in the framework whether this is applicable to their family members, too. Additional language in the bill covers “in-home supportive service providers and personal waiver care service providers” who are unable to work for reasons relating to COVID-19.

“The reality that construction workers would continue to show up to work as opposed to staying home while they’re sick is not just a danger to their own co-workers but also to those of the other construction workers on the project due to the close proximity on the job site,” Mike West, spokesman of the State Building and Construction Trades Council, said during public comment.

The proposal is expected to pass with the governor’s approval, but Budget Committee Vice Chair and state Assemblyman Vince Fong (R-Bakersfield) cross examined the Legislative Analyst’s Office (LAO) and the Department of Finance on the bill’s financial framework during the Feb. 7 meeting.

According to an analysis by the LAO, the cost to provide a statewide tax credit system for employers who must implement paid sick leave ranges from $500 million to $1.4 billion through the program’s expiration date in September.

“So, whatever costs was incurred in the previous bill would be incurred again, but we now would know with no offset?” Fong asked the LAO during the hearing.

“That is correct,” an LAO spokesperson responded. “And again, I always point to some of the other supports that are outside that we are providing to small businesses.”