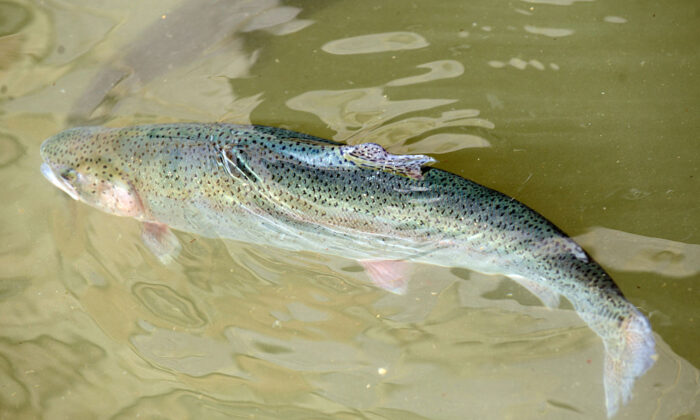 A rainbow trout is pictured at the fish farm of the Goicoechea family, which creates products made of rainbow trout skin leather, in Banca, southwestern France, on Feb. 16, 2016. (Iron Gaizka/AFP via Getty Images)
Northern California

California will humanely euthanize approximately 350,000 catchable rainbow trout due to a bacterial outbreak, which has led to a fishing stock shortage in parts of the state, the California Department of Fish and Wildlife announced on June 20.

Two facilities operated by the state agency—Black Rock and Fish Springs hatcheries in Inyo County—were detected with a naturally occurring bacteria, Lactococcus petauri, as early as April this year. Nearly 350,000 rainbow trout are infected and showing signs of disease, according to the department’s statement.

“This loss is a huge disappointment, but we were prepared for this possibility and are doing all we can to ensure to continue angling opportunity for the public,” Fisheries Supervisor Russell Black said in the statement.

Because of the bacterial outbreak, the department will euthanize all infected fish, contract with external vendors to purchase catchable rainbow trout for Mono County, and redirect some fish from its other hatcheries across the state to support affected regions.

“The fish from the private contractor and stocks from non-infected hatchery facilities will help bridge the gap while we work to vaccinate the remaining stocks at the affected facilities. We are doing all we can to stock as many fish as possible,” Black said.

The department’s pathologists believe the bacteria—often spread by the movement of fish or eggs, according to the statement—was carried into the hatcheries by birds.

Infected fish can either show symptoms including “bulging eyes, lethargic, or erratic swimming and increased mortality,” or show no signs of infection depending on various factors.

To prevent future outbreaks, the department will improve its hatchery infrastructure and use two different types of fish vaccines developed by scientists from the University of California–Davis.

Although fish-to-human transmission of the bacteria is “rare and unlikely,” according to the statement, the department recommends anglers follow recommendations from the U.S. Department of Agriculture on cooking fish to an internal temperature of 145 F.