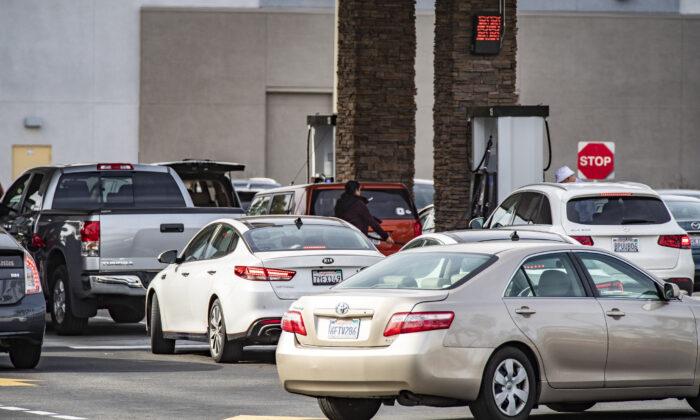 California to Delay Annual Gas Tax Increase for One Year

California Gov. Gavin Newsom proposed Jan. 10 to suspend the state’s annual gasoline and diesel tax increase for at least a year, in an effort, he said, to help motorists already paying the highest gas prices in the country.

The proposal would mean the state would skip its July 1 tax hike on gas, which has occurred every year since the passage of Senate Bill 1 in 2017—a tax on gas to raise $5.4 billion annually to repair the state’s highways, bridges, and more.

Newsom’s proposal was part of the release of the state’s over $200 billion budget, which will kick in on July 1 for fiscal year 2022–23.

Reducing the tax increase would mean $523 million in savings for motorists in the 2022–23 fiscal year, due to an estimated 5.6 percent inflation rate for motorists across the state.

Newsom said that despite helping motorists by not increasing the tax this year, the development that the taxes would normally go to will continue to be funded.

“We’re going to backfill it in terms of the tax itself to transportation projects so that there’s no direct impact to investments,” Newsom said during the news conference on the state’s new proposed budget. “But there will be a direct impact by [people] avoiding that inflation adjustment that comes in July … to increase the gas tax.”

According to the Automobile Club of America, this week’s average gas prices in California were the highest to start a new year, with the average price for regular gasoline at $4.66, just shy of the $4.71 record price in November. The average price across the country is $3.30.

In combination with federal and state taxes and other fees, Californians pay 86 cents per gallon in added taxes, 51.1 cents of which are state taxes, which are also the highest in the nation.

California Republicans said they were pleased with the so-called “gas tax holiday,” which they have been asking for in recent months as prices have increased.

“For months I’ve been calling for a [gas tax holiday],” Sen. Brian Jones (R-Santee) wrote on Twitter. “The Governor’s draft budget halts this year’s gas tax increase. I applaud him for listening to this commonsense idea.”