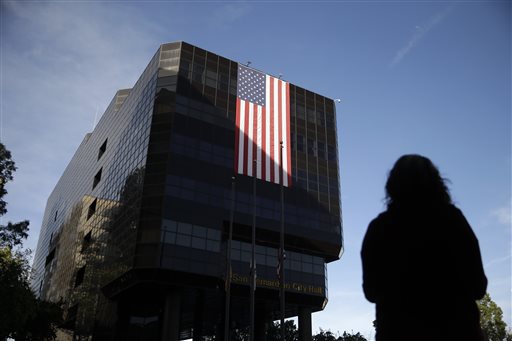 Emily Petrus, a worker for San Bernardino County, pauses to look at a large flag hanging on San Bernardino City Hall on Monday, Dec. 7, 2015 in San Bernardino, Calif. County employee's returned to work today after Wednesday's mass shooting. Thousands of employees of San Bernardino County are preparing to return to work Monday, five days after a county restaurant inspector and his wife opened fire on a gathering of his co-workers, killing 14 people and wounding 21. (AP Photo/Jae C. Hong)
US

SAN BERNARDINO, Calif.—The husband and wife who carried out the San Bernardino massacre had been radicalized and had taken part in target practice, one time within days of the attack that killed 14 people, the FBI said Monday.

In another chilling twist, authorities disclosed that a year before the rampage, Syed Farook’s co-workers at the county health department underwent “active-shooter” training in the very conference room where he and his wife opened fire on his colleagues.

It was not immediately clear whether Farook attended the autumn 2014 training session on how to react to a workplace gunman, county spokeswoman Felisa Cardona said. It was held for members of the department’s environmental health division, where Farook was a restaurant inspector.

On Monday, one employee in the room when Farook and Tashfeen Malik opened fire on a work holiday party Wednesday said colleagues tried to do just as they had been trained — find protection and stay quiet.

Meanwhile, thousands of county employees went back to work for the first time since the rampage five days earlier.

Farook, a 28-year-old born in the U.S. to a Pakistani family, and Malik, a 29-year-old immigrant from Parkistan, were killed in a gunbattle with police hours after the bloodbath.

“We believe both were radicalized and had been for some time,” said David Bowdich, assistant director of the FBI’s Los Angeles office. But he said investigators are still trying to establish precisely when, where and by whom they were influenced.

He also said the Muslim couple had taken target practice at ranges within the Los Angeles metropolitan area, with one session held within days of the rampage.

In addition, authorities found 19 pipes in the couple’s home in Redlands, California, that could be turned into bombs, Bowdich said.

Cardona, the county spokeswoman, said the active-shooter training was held in November or December of 2014 at the conference room that the health department rented for this year’s party.

The reopening of much of the government’s offices signaled an effort to return to normal for a community in shock and mourning.

“To honor them, to express our gratitude for their unimaginable sacrifice, we have to fight to maintain that ordinary,” County Supervisor Janice Rutherford said of the victims. “We can’t be afraid of our lives, of our community, of our neighbors, of our co-workers.”

Following the attack, the county shut down all but essential services, with many of its 20,000 employees staying home. Authorities said that they tightened security at county buildings and that counseling centers and a hotline were open for employees in distress.

While most employees went back to work Monday, those at the environmental health services division, where many of the victims worked, will be off until next week.

President Barack Obama said in a prime-time address Sunday night that the attack was an “act of terrorism designed to kill innocent people.”

While there was no evidence the killers were directed by a terror network overseas or were part of a broader plot, “the two of them had gone down the dark path of radicalization,” Obama said.