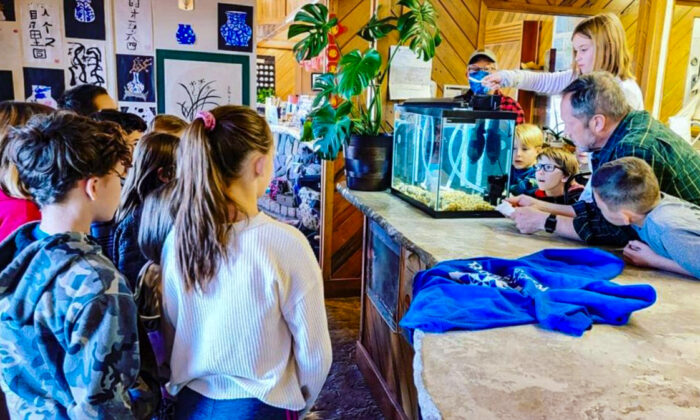 Students gather around a fish tank during class at Roots Farm in Palo Cedro, Calif., on Feb. 5, 2022. (Courtesy of Roots Farm)
Northern California

“I believed that I was harming students by forcing the masks on them. I witnessed one student hyperventilating in class because of his mask,” Melody Fowler, an educator and parent, told The Epoch Times.

California lifted its statewide school indoor mask mandate on March 12, allowing many students across the state to unmask while in school for the first time since the start of the pandemic two years ago.

Fowler said she attended her former school district’s board meeting at the beginning of March and heard that the district would lift the mask mandate on March 12 in line with statewide policy.

“Knowing in the back of my mind that [the board] already pulled the religious and medical exemptions for students already in the district, it was just another, you can say, ‘moving the goalpost,’” Fowler said. “That’s what our state and county continually do. It’s a psychological battle on our minds. It’s a slow grind down on our will and our spirit.”

She explained that she didn’t enforce the school district’s mask mandates in her classroom, and she was subsequently harassed and written up for the first time in her teaching career. She made the decision to resign in August 2021, because she disagreed with the mandates and the direction that public school curriculums are heading.

“Honestly, it was just until last year that it got really bad. I see the indoctrination, the state testing, what the kids are presented to read and answer questions [on],” said Fowler.

She and husband, Chad Fowler, have since started their own tutoring program that provides students with the education they need without the mandates of public schools. While they originally dreamed of opening a public charter school, the charter school moratorium and education budget cuts pushed them to instead start a tutoring program called Roots Farm.

Their education program adopts the Charlotte Mason approach to teaching, which is based on the idea that each child is a whole person with their own will and passions. Teachers are seen as a facilitator to learning and the ones who encourage and present ideas for students to make their own connections, thus making their learning a “self-education.”

In addition to math, science, history, and language arts, the program teaches students to cherish nature and skills such as gardening, crafting, music, and more.

“It’s our American roots. It’s the founding of our country and teaching them to love our country,” said Melody Fowler.

She explained that they wanted to offer full-time private education, support parents who choose to homeschool their children, and provide families with an alternative education option, especially in light of pandemic-related mandates.

“The difference between the teachers that stood up and the ones that didn’t was … I believe, fear. There’s a quote by Winston Churchill that says ‘fear is a reaction’ and ‘courage is a decision,” Fowler said. “You have to choose courage, and it’s scary, it’s terrifying, but you have to be afraid to have courage in the first place.”

Fowler has 15 years of teaching experience, having taught fifth grade for 11 years before moving on to teaching eighth grade English and U.S. history. Her husband is a former teacher, having taught in public schools since 2008 and participated in Shasta County 4-H.

“I know a lot of good teachers, and I know it’s been hard for them,” she said. “I know they love children, but they feel like they don’t have a choice out of it. This is where we have to be pioneers in education and change things.”