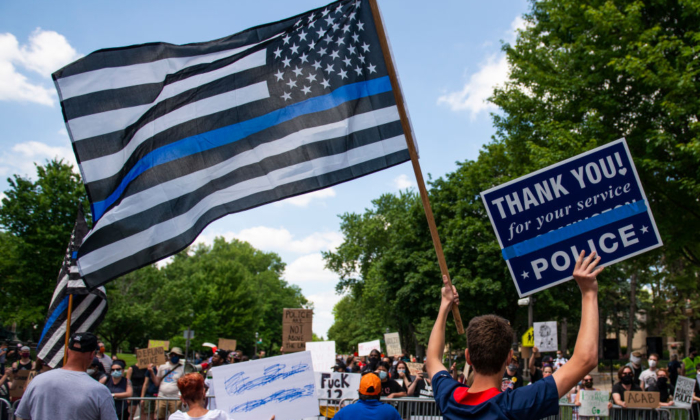 In a file photo a demonstrator holds a "Thin Blue Line" flag and a sign in support of police during a protest outside the Governors Mansion on June 27, 2020 in St Paul, Minnesota. (Stephen Maturen/Getty Images)
US News

A California substitute teacher referred to a mask worn by a student bearing the thin blue line flag for police officers as the next confederate flag and told the teen he had no right “bastardizing” the American flag.

The middle school teacher, whose identity could not be confirmed by The Epoch Times, was caught on video by a student in the math class using a smartphone. In the video, the burly teacher is yelling at 13-year old Lucas Lillar, who argues back with the teacher that he was wearing it in honor of his father, a police officer, as a way to, “keep him safe,” the teen says.

“If cops don’t like you, they shoot you,” the teacher, who appears to be in his mid-50s, said to Lucas and other students who began arguing in support of their classmate’s mask.

Amanda McCallum, Lucas’s mother, told The Epoch Times that she was shocked by how willing the substitute math teacher was to go “toe to toe with her young son” over his clear anti-police sentiment. “He’s clearly uneducated,” said McCallum, who works as a dental assistant.

“It was extremely inappropriate no matter where you stand politically,” said McCallum. “This should never ever have happened in a classroom.”

McCallum, and her husband, who is a county deputy sergeant, are divorced but she said she supports his service in law enforcement and her son’s homage to him.

In a statement released to The Epoch Times, Nevada County School District Superintendent Scott Lay said the teacher has been dismissed as a substitute teacher for the county.

Lay told The Epoch Times that he could not comment on anything specifically to do with the incident because it is pending an investigation.

“We expect all educators to perform their duties with utmost respect and professionalism to afford our youth an environment conducive to learning,” Lay said. He would not confirm the identity of the teacher.

According to McCallum, her son was working quietly at his desk on an assignment when the teacher sat in an empty desk behind him and heckled him about his mask, saying it was “not American.”

McCallum said the incident came at an especially bad time with the two police officers recently shot and killed in New York City while answering a domestic violence call in the Bronx. She said her son and daughter have a heightened awareness of police killed in the line of duty, even reacting when they hear sirens in their small town.

“Children of law enforcement sacrifice a lot,” she said.

McCallum said she is also appalled that a teacher used a school classroom to bully children with his political views. “That should never ever have happened in a classroom. A child should feel safe to express themselves with their First Amendment rights and teachers should understand they don’t have those same liberties with kids,” she said.

Grass Valley is a small town of about 12,000 residents located about 50 miles outside of Sacramento.

In 2020, police shootings became a divisive subject for the community when a Nevada County deputy shot and killed a mother in front of her two young children in the town. Some in Grass Valley said the shooting was justified given the woman tried to attack officers with a knife while others asked why one of the officers didn’t just wound her instead of firing on her multiple times. An officer did fire a taser at the woman but it was ineffective in stopping her attempted knife attack. Coincidentally it is the same sheriff’s department where Lucas’s father works.

More fodder on the debate came from a 2019 study from The Center for Policing Equity, which showed that police in nearby Sacramento were 4.5 times more likely to commit acts of force against black people.

The study was performed at the request of the Sacramento police department following the beating of a Nandi Cain by a police officer in 2017 and the shooting death of Stephon Clark by two police officers after mistaking his cell phone for a gun.