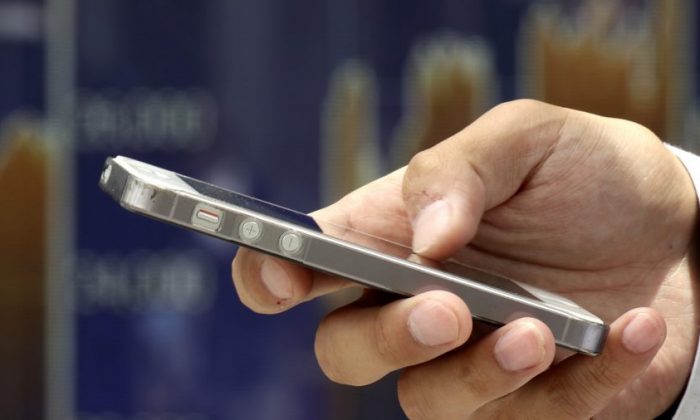 A man uses a smartphone in a file photo. (Shizuo Kambayashi/AP)
Politics

The latest tax proposal in California would take money from people for sending text messages.

The California Public Utilities Commission will vote on the proposal in January 2019.

The bulk of the money garnered by the tax would go towards programs that help low-income California residents afford phone service, according to a commission report (pdf).

“Parties supporting the collection of surcharges on text messaging revenue argue that it will help preserve and advance universal service by increasing the revenue base upon which Public Purpose Programs rely. We agree,” the commission stated.

The proposal includes a retroactive surcharge of five years.

There are currently 40 million cell phones in California, according to the commission.

While it’s not clear how much people would have to pay for texting services, it would likely be a flat surcharge per customer, not a fee per text, according to the San Jose Mercury News.

“It’s a dumb idea,” Jim Wunderman, president of the Bay Area Council, a business-sponsored advocacy group, told the outlet. “This is how conversations take place in this day and age, and it’s almost like saying there should be a tax on the conversations we have.”

According to business groups, the new charges would total about $44.5 million a year. However, with the retroactive surcharge, the total could reach above $220 million.

“From a consumer’s point of view, surcharges may be a wash, because if more surcharge revenues come from texting services, less would be needed from voice services,” said commission spokeswoman Constance Gordon in a statement. “Generally, those consumers who create greater texting revenues may pay a bit more, whereas consumers using more voice services may pay less.”

California has the highest sales tax rate in the nation at 7.25 percent.

“Unless you’re being really specific about a particular type of tax, California is usually at the high end of the states,” Joe Henchman, vice president of the Tax Foundation, told Politifact.

“It’s almost always in the top half of the states in terms of a tax or its burden or how much people pay. And it’s often in the Top 10.”

According to a report published by the foundation in 2016, California was the sixth highest in terms of “state-local tax burden as a percent of state income.”

High taxes and cost of living have contributed to the so-called California exodus. According to a realtor.com report, over one million more people moved out of the state than moved in from 2006 to 2016.

Jamie Williams, who bought a house in Nevada with his wife, told CBS earlier this year that the planned move was prompted by the cost of living.

“Just with the overall cost of living and the tax situation, and really the inability of our kids to be able to afford to live here, as well,” he said. “So they’ve immigrated out of the state. We’re really just trying to conserve our resources for the long haul and it’s just a very expensive place to live.”