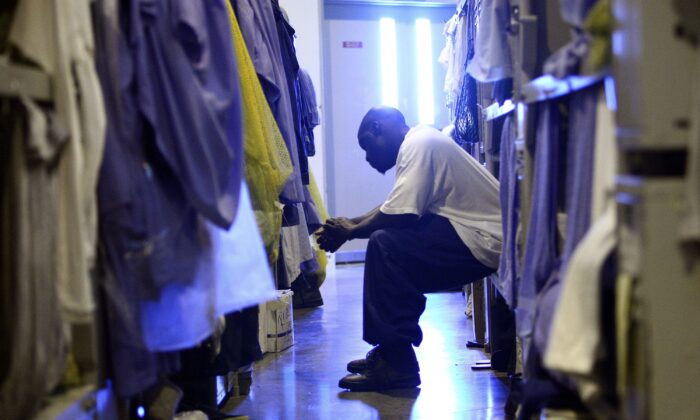 An inmate at the Mule Creek State Prison sits on his bunk bed in a gymnasium that was modified to house prisoners in Ione, Calif., on Aug. 28, 2007. (Justin Sullivan/Getty Images)
US News

The California Supreme Court on Thursday upheld the state’s current death penalty law, dismissing an attempt to make it harder to impose a sentence.

Under the current system, jurors do not need to unanimously agree on specific aggravating factors used to justify handing an individual a death sentence. The court upheld the longstanding practice in a 7-0 decision.

“We have previously held that jury unanimity on the existence of aggravating circumstances is not required under the state constitution,” Justice Goodwin Liu wrote on behalf of the unanimous court.

He wrote that the death penalty might be fairer if the state did make changes, noting that the state attorney general’s office also agreed that such a requirement “would improve our system of capital punishment and make it even more reliable” and that state lawmakers should consider the change.

“Nevertheless, to date our Legislature and electorate have not imposed such requirements,” Liu wrote, and the court found there is no such mandate in state law or the constitution.

The court ruled that there was no legal support for overhauling the death penalty law, and doing so could have undermined the death sentences of California’s nearly 700 condemned prisoners.

While there is currently a moratorium on the death penalty in California from Gov. Gavin Newsom, it only lasts as long as he is in office, and many cases can take 25 years to fully prosecute.

The foundation said ruling otherwise would have had “a devastating impact on hundreds of well-deserved judgments for horrible crimes.”

In written arguments to the court, Newsom, a Democrat, called for changes to be made in how the death penalty is enforced, arguing that the system discriminates against black and Latino defendants.

Erin Mellon, a spokeswoman for Newsom, said the court “missed an opportunity to fix one of the many flaws in California’s death penalty.” Executions are irreversible and the process discriminates not only on race but against those who are poor or mentally ill, she said.

Only 13 prisoners on death row have been executed since 1992, and the state hasn’t executed anyone since 2006.

President Joe Biden, meanwhile, is the first sitting U.S. president to openly oppose the death penalty. Last month, the Justice Department announced it is pausing federal executions while pending review of its policies and procedures.