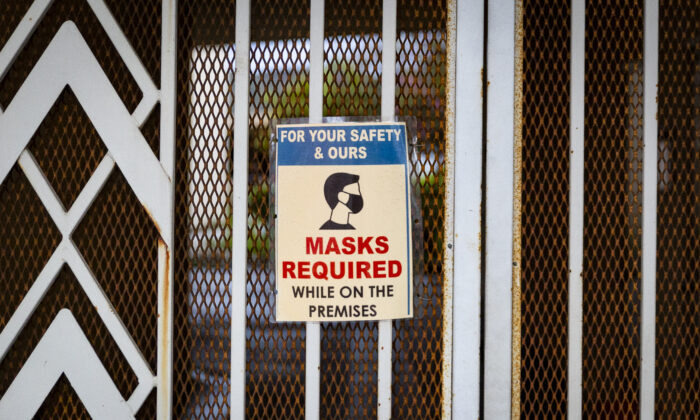 Troy Pierini, a high school sophomore in Orange County, has been locked out of his classroom, had the police called on him, received a citation for trespassing, and was ultimately suspended, all because he has refused to wear a mask.

Pierini, 16, says he has a learning disability, and the cloth over his mouth—and that of his teacher—only makes things worse. He said his friends feel similarly.

“It’s hard to hear the teacher when they’re speaking,” he told The Epoch Times. “It’s hard to focus in class, and kids with glasses have their glasses get fogged up and it’s hard for them to see the board. It affects a wide variety of people, not just me.”

The latest action in Pierini’s saga—a three-day suspension by officials at Tesoro High School in Los Flores, in southern Orange County—is unlawful, according to attorney Ryan Heath, who has been retained by Pierini’s family and is the founder of the Gavel Project, a nonprofit civil rights firm.

“[The school] has no legal authority to suspend him,” Heath told The Epoch Times. “Troy has a right to be [in school]. He is engaged in an act of free speech.”

The Capistrano Unified School District, which governs Pierini’s school, said it couldn’t comment on his case, yet affirmed that a student showing up to school after being suspended is considered trespassing.

“We take a layered approach to working with students and their families in an effort to accommodate our students,” Ryan Burris, a spokesperson for the district, told The Epoch Times in an email. “However, if a student should defy administration and disrupt student learning, a student may be suspended. If this occurs, the student is not permitted to enter the campus. In doing so, they would be considered trespassing.”

Burris said the district “deeply respects” the right to free speech and the diversity of opinions, yet the fight doesn’t belong at school sites.

“Our school sites do not make the rules, but they must comply with them,” he said. “These mandates are created by the state and we continue to ask all families to share their feedback with the governor and with the California Department of Public Health.”

Notwithstanding Pierini’s constitutional rights—he’s out of school until Feb. 22—others say his mental health is also possibly at risk.

Issues of students protesting COVID-19 mask mandates across the country have become more common in recent weeks as the Omicron variant has waned and experts have, more and more, spoken out on the possible medical, emotional, and psychological tolls of the past two years.

“There is overwhelming evidence that [child masking] is causing significant harm,” said Dr. Mark McDonald, a Los Angeles-based child psychiatrist and author of “United States of Fear,” a book published in November 2021 that discusses the impact of masking children.

McDonald hasn’t treated Pierini, but he says of his case—and that of other children who make a similar choice to not mask up—that he may suffer from emotional fallout later.

“The kids that want to stand up and not wear [masks] … are going to feel tremendous pressure to conform until all kids stop wearing them,” McDonald told The Epoch Times. “They will feel left out. They will probably be bullied. And they will certainly feel ostracized if they are not conforming to the group.”

A lack of being able to freely socialize and so much mask-wearing, McDonald said, has actually caused the IQ of infants born after the pandemic to drop.

McDonald was citing two recent Brown University studies: one that reveals that babies born after the pandemic show a 22 point drop in IQ, and the other saying that nearly 25 percent of children aged birth to 5 have experienced an overall decline in brain function when pandemic years 2020 and 2021 were compared to 2019.

Speech-language referrals for children, McDonald said, have also increased as much as 300 percent, as children are having difficulty learning to talk because they can no longer see how teachers enunciate their words.

Finally, McDonald also says some children have developed a “pacifier-like obsession” about wearing masks and may continue to wear them as a crutch even when the mandate is finally lifted.

“[For children with social phobias,] they’re using [masks] as a way to escape from confronting the social challenges that they face. It’s basically enabling a form of mild mental illness and developmental delay,” he said.

As mask mandates remain in place for California students at least until the end of February, some say there has been a trend, which may continue, of an unprecedented number of parents pulling their children out of public school, opting for other options.

“I think you’re going to have a huge rush to the exit doors,” Lance Izumi, senior director of the Center of Education at the Pacific Research Institute, a San Francisco-based think-tank that provides policy analysis based on free-market principles, told The Epoch Times. “A lot of parents are just fed up with things.”

“One of the things that infuriates parents is that their elected officials and unelected ones such as health directors don’t seem to be interested in listening to them,” Izumi said. “They seem totally uninterested in having any kind of constructive dialogue with parents about the costs and benefits of these policies.”

If enough students decide to not attend school, and the districts lose enough funding as a result, Izumi said he thinks that missing dialogue between concerned parents and education officials will begin.

But parents have led protests and angrily spoken at school board meetings.

While their efforts have so far been unsuccessful, Sharon McKeeman, founder of “Let Them Breathe,” said all is not lost.

“The most important thing that the parents rallying and speaking out [have] accomplished [is] helping to form this movement and help the community connect, and help … bring awareness,” McKeeman told The Epoch Times.

Now that students are more and more taking up the cause, like Pierini, the push-pull dynamic may have begun to change.

“The state has put [schools] in a ‘Catch 22,’” McKeeman said. “The state has said ‘enforce this unlawful mandate’ but … has not given [schools] any lawful way to enforce it that doesn’t violate students’ rights.

Students on campus “peacefully sharing their smiles,” she said, “is going to cause schools to tell the state they have been put in an unsustainable situation and the mandate needs to end.”

Students like Pierini and others, McKeeman said, have created a turning point.

“It’s very much making a very big difference,” she said.