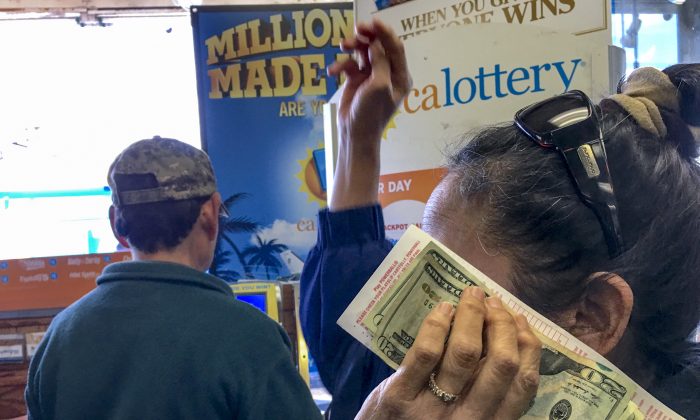 FILE - In this Jan. 13, 2016 file photo, customers wait to buy lottery tickets at the Blue Bird liguor store in Hawthorne, Calif. With hours to go and $63 million on the line, the mystery remains: Wheres the winning California Lottery ticket - the one sold last Aug. 8, that is - and why hasnt somebody cashed it? Whatever the reason, it wont be a good enough excuse if the 5 p.m. Thursday, Feb. 4, 2016 deadline passes and nobody produces the ticket at a lottery office. The ticket was sold at a 7-Eleven store in the Chatsworth neighborhood of Los Angeles.(AP Photo/Damian Dovarganes, File)
US

California State Lottery officials say no one showed up with the winning ticket for the $63 million jackpot, or submitted a verified claim for the prize, by the Thursday afternoon deadline.

However, officials are investigating a number of claims—including one man who filed a lawsuit that says officials destroyed his ticket.

Brandy Milliner contends he already turned in the ticket, but officials told him it was too damaged to be processed. He said the commission even sent him a letter congratulating him for the winning ticket, saying he would receive a check in six to eight weeks, reported the Los Angeles Times.

But Milliner says he was sent a second notice later on saying the ticket was “too damaged to be reconstructed” and his claim could not be processed. Miller now wants a judge to declare him the winner.

Traverso said the lottery is looking into the claim.

“We do have some claims to investigate,” he said in an email shortly before the 5.p.m deadline. “So we can say as of right now, no one has come forward with the winning ticket. But we have had lots of inquiries and the potential for more claims.”

If none of the claims pan out, it will be the largest unclaimed prize in California Lottery history and the money will go to the state’s schools.

Lottery officials had sent out repeated calls for the winner to contact them, and media coverage ramped up as the deadline dwindled to days and then hours.

“If by some miracle you happen to find this extremely valuable piece of paper, the California Lottery urges you to sign your ticket in ink and get it to one of our lottery district offices,” a Wednesday statement said.