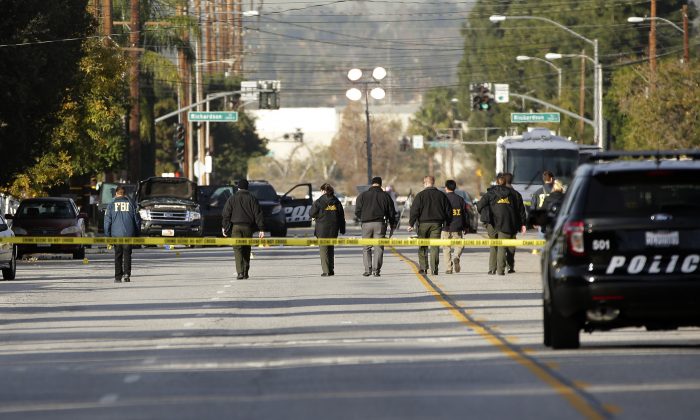 As investigators search for a motive behind the deadly rampage in San Bernardino, politicians are searching for a way to talk about it.

The details of the California massacre at a holiday party — pointing at a possible link to Islamic militants and raising questions about domestic extremism — quickly knocked both Republicans and Democrats off their talking points, upending what has become a grim and predictable ritual in American politics.

Democrats who have vowed to use every mass shooting as a moment to call for new gun laws were tempering their rallying cries. Republicans who point to mental health services as the solution had begun to blame extremist views.

In an interview Friday morning, Florida Sen. Marco Rubio said “we have a violence problem in America” but added it’s not exclusive to guns. A U.S. citizen with a clean background but extremist views is perhaps the most significant threat,” he said.

“That is a very significant, difficult threat to confront,” the Florida Republican said on CBS “This morning.”

Hillary Clinton also moved carefully in that direction. “It’s becoming clearer that we are dealing with an act of terrorism,” she said Thursday. “It does raise some serious questions about how we need to be protecting ourselves.”

Addressing those questions will become a far more complex debate with fewer clear-cut policy prescriptions than the well-trod conversation over gun control.

President Barack Obama has said he worries about the difficulties of preventing a homegrown or “lone-wolf” attacker on U.S. soil — and the limits of security measures to prevent them. But proposing tighter domestic security measures or expanded intelligence gathering is unlikely to win easy support from many in his party. For Republicans, the issue could become quick campaign fodder — although they risk politicizing a national security threat, without offering a clear alternative.

On Thursday, the president walked a fine line in the discussion, mindful of an ongoing investigation and shifting circumstances. He asked for patience, assured Americans they were safe and, notably, toned down his typically full-throated call for congressional action on gun control.

After a briefing from his national security team, Obama asked the American people and “legislatures” to find a way to make “it a little harder” for people to get guns.

“And we’re going to have to, I think, search ourselves as a society to make sure that we can take basic steps that would make it harder — not impossible, but harder — for individuals to get access to weapons,” he said.

Republican presidential candidate Donald Trump was also knocked off his talking point. After initially cast such shootings “a mental health issue, to a large extent,” in an interview with The Associated Press on Wednesday night, he offered another explanation Thursday.

“Our president doesn’t want to use the term,” he said. “But it turns out it probably was related — radical Islamic terrorism.”

Obama’s comments were a far cry from the frustrated rants he has unleashed in the wake of other mass murders. Last week, the president decried the shooting and hostage taking at a Colorado Springs Planned Parenthood facility with a statement that declared “enough is enough.”

In October, after 9 people were killed by a gunman at Umpqua Community College in Roseburg, Ore., Obama promised to come out and speak every time such incidents occurred and said he wasn’t afraid of politicizing the debate.

White House spokesman Josh Earnest said Thursday that Obama was not backing off his push to drive a conversation about gun measures. White House lawyers are continuing to search for ways Obama can expand required background checks without congressional approval. Earnest argued that the shooters in San Bernardino, regardless of their motives, could have been stopped if the gun laws were changed.

But Earnest conceded the proposals Obama has pushed — expanding background checks or barring people on a federal no-fly from buying guns — would not necessarily have prevented this massacre.

“This discussion is about what we can do to keep guns out of the hands of people who shouldn’t have them,” Earnest said.

Searching for a rebuttal to the Democrats’ case on guns, Republicans have zeroed in on mental health.

“All the themes we see underneath these events, that’s one thing that really has to get addressed,” House Speaker Paul Ryan, R-Wis. said Thursday morning on MSNBC’s “Morning Joe.” Ryan was cautious not to label the shooting before the facts were known.

But some his fellow Republicans vying for the White House were not.

Along with Trump, Sen. Ted Cruz, R-Texas, evoked the Paris attacks and said the shooting was a reminder the U.S. is at war. Cruz told a crowd of Jewish activists that “all of us are deeply concerned that this is yet another manifestation of terrorism, radical Islamic terrorism here at home.”