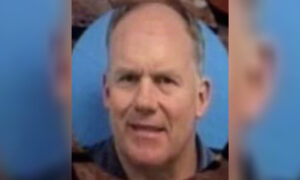 A Southern California sheriff’s deputy is in serious condition after being shot following a pursuit of a motorcyclist in a desert community east of Los Angeles on Monday, authorities said.

The San Bernardino County Sheriff’s office said that deputies from the Morongo Basin station in the Yucca Valley area were conducting extra patrol for off-highway vehicle violations at around 12:33 p.m., when they spotted a male subject riding a street motorcycle without a license plate.

The duties attempted a traffic stop, and a pursuit ensued. A short time later, the deputies located the motorcycle and the rider was gone.

As they approached the motorcycle and attempted to locate the rider, the rider started firing at responding deputies. One deputy was struck by the gunfire, said San Bernardino County Sheriff-Coroner John McMahon.

Shortly later, the suspect began shooting again at additional deputies, who returned fire, killing the suspect. McMahon said a handgun was located at the scene.

The wounded deputy was then airlifted to a local hospital to receive medical care for his injuries, and as of Monday night, remains in serious condition.

The investigation remains ongoing, the department said on Twitter.