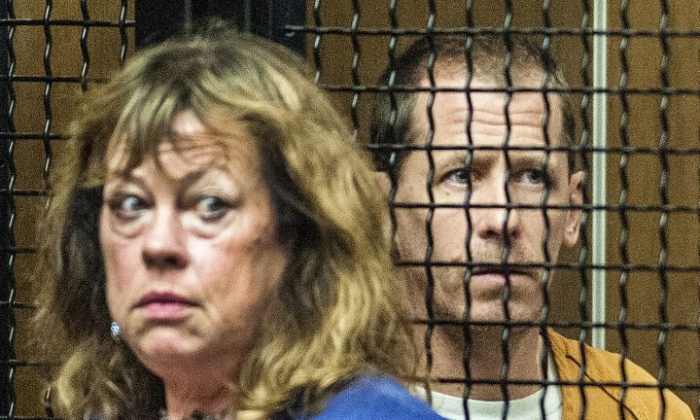 In this Oct. 2014, file photo. Steven Dean Gordon, right, of Anaheim, Calif., appears for his arraignment with associate defender Denise Gragg, left, during a hearing in superior court in Santa Ana, Calif. Gordon, a California sex offender who was being tracked by GPS, has been found guilty Thursday, Dec. 15, 2016, of killing four women. (Mark Rightmire/The Orange County Register via AP, File)
US

A California sex offender was found guilty Thursday of killing four women while he was being tracked by GPS. He now may face the death penalty.

Steven Dean Gordon was found guilty of four counts of murder for the attacks in 2013 and 2014. Orange County jurors only deliberated for about an hour before issuing the verdict. They also found true special circumstances of murder during a kidnapping and multiple murders, which will make Gordon eligible for a death sentence.

Victims’ relatives clutched hands in the courtroom and closed their eyes while the verdicts were read. Some trembled and some cried.

Gordon looked straight ahead and did not show any emotion.

On Monday a penalty phase will begin where jurors will decide whether to recommend a death sentence or life in prison without parole.

Investigators said they pieced together the case after the body of missing 21-year-old Jarrae Nykkole Estepp was found at a recycling center in Anaheim. Authorities said the men’s tracking devices linked them to the disappearance of the women.

Gordon, who represented himself at trial, confessed to authorities in an interview played for jurors about his role in the killings.

Gordon and Cano were registered sex offenders after being convicted in separate cases of lewd and lascivious acts with a child under 14. Gordon was convicted in 1992 and also has a 2002 kidnapping conviction, while Cano’s conviction dates back to 2008.

At the time of the killings, Gordon was living in an RV in an industrial area of Anaheim where the men brought their victims and wore a GPS device during at least three of the murders, according to grand jury testimony.

Authorities charged the men with killing three women who went missing in Santa Ana in late 2013 — Kianna Jackson, 20, Josephine Monique Vargas, 34 and Martha Anaya, 28 — in addition to Estepp. All four women had links to prostitution.

Police believe Cano and Gordon knew each other since at least 2010, when Cano cut off his GPS device and fled to Alabama, where he was arrested with Gordon. Two years later, they again cut off their monitoring devices and boarded a Greyhound bus to Las Vegas using fake names before being arrested two weeks later by federal agents.

Cano, who is being tried separately, has pleaded not guilty. His next court appearance is Dec. 29.