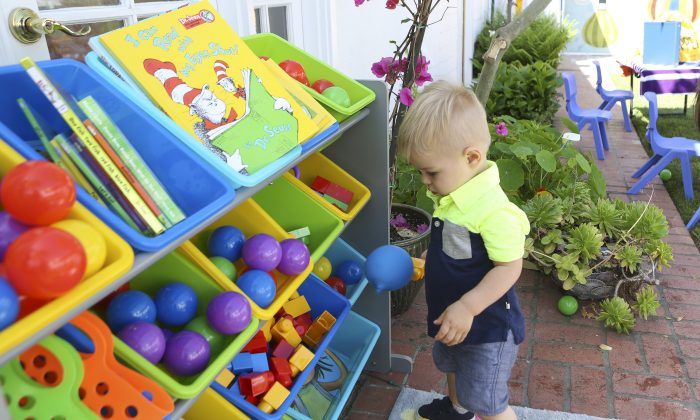 California to Launch Program That Tracks Children From Womb

California is readying a new program that would collect data on children from before birth to adulthood.

The plan (pdf), which is a central part of Gov. Gavin Newsom’s education agenda, would give the government the power to collect data from state agencies responsible for regulating elementary and secondary education, as well as childcare providers, private and public universities, financial aid institutions, labor and workforce agencies, and health and human services program administrators.

The data would be gathered into a government-run database and provide policymakers information that would then be used to craft policy. The budget allocates $10 million to create this database.

The so-called “Cradle to Career Data System” will be “identifying and tracking predictive indicators to enable parents, teachers, health and human services providers, and policymakers to provide appropriate interventions and supports to address disparities in opportunities and improve outcomes for all students,” according to the budget text.

When discussing the program, Newsom said that the goal was to change how we think about education.

“Our role begins when babies are still in the womb and it doesn’t end until we’ve done all we can to prepare them for a quality job and successful career,” he said in 2018, EdSource reported.

But unlike traditional pieces of legislation, the “Cradle to Career” plan was never introduced into the state legislature as a bill, which would have placed the program under the scrutiny of a number of committees. Instead, Newsom presented the plan as part of a budget trailer bill.

This gave the governor and his team the power to negotiate the plan beforehand, providing lawmakers with the final product as a “done deal,” according to an article by Susan Shelley in the Daily News.

Groups such as the Education Trust-West, an advocacy group whose goal is “educational justice,” are celebrating the plan as “an important win,” saying it will be crucial for “closing racial equity gaps.”

But despite their high hopes, Shelley warned that there are serious risks concerning children’s privacy that are not being properly addressed. She said mishandling this data “would expose the personal and educational records of every child in California to hackers or data merchants.”

“I do not feel comfortable allowing my children to take part in this,” he said.

In an interview with The Epoch Times, Mosley said he might remove his children from the public school system if the program becomes law.

“[Cradle to career] unnecessarily exposes both personal and educational records, and not not just to hackers and data merchants, but to a government that has historically not had the best interest of all its citizenry at heart,” he said.

However, podcaster and anti-censorship advocate Matt Billy believes these fears are unfounded. In the end, he told The Epoch Times, bringing all this data together under one centralized power “does not increase the privacy risk significantly.”

“The data gleaned from the database will help California invest in education more wisely. Meaning, people’s tax dollars will be better put to use,” he said.

To attorney Anne P. Mitchell, the CEO of the Institute for Social Internet Public Policy, the risks are serious enough to make it a truly “scary” program.

“There really can be no way to completely secure this data,” she told The Epoch Times.

“Any time any piece of data is on a computer that is connected to the internet, or even to an intranet, that connection is a possible point of failure. The only way to be 100 percent certain of the security of a piece of data is for there to be only one copy, on one computer, which computer is not connected to any other computer.”

When it comes to children’s data, Mitchell said, things can get dangerous the minute original data is distributed and copied, as the “potential for additional copies [of the data] is out of the [distributor’s] hands.”

“This is just the very tip of the iceberg when a record of a child entering kindergarten, for instance, is intended to be distributed for at least 18 years, to multiple agencies.”

What’s worse than seeing this program being implemented in California, Mitchell said, is to know that several states are already making use of similar data-gathering systems to track children. California might be new to the trend, but this is far from a California-only issue.

“This initiative is in response to the Federal State Longitudinal Data System Grant Program (SLDS), which is based on federal grants for states to develop data systems needed ‘to effectively measure the success of educational programs,’” Mitchell said.

“This effort has been quietly, with little-to-no fanfare, been instituted throughout the country since 2005, and 47 states are already receiving these grants (including California), [with] 37 states plus Washington, D.C., already sharing their ‘cradle to workforce’ data.”

Now that this endeavor has made its way to the Golden State, this piece of news might become more widely known.

“Up until this time, nobody has been talking very publicly about it, or not sounding the alarm. [Unfortunately], there is no question of ‘not tracking them’—this has been [in effect] in nearly all states, and while the Federal government hasn’t mandated it in the sense of passing a law requiring it, it has de facto mandated it in the way that it often does: using the power of the purse.”

“[It’s] shocking how nobody really knows about it, while it is quietly being put in place over the past 15 years,” Mitchell said.