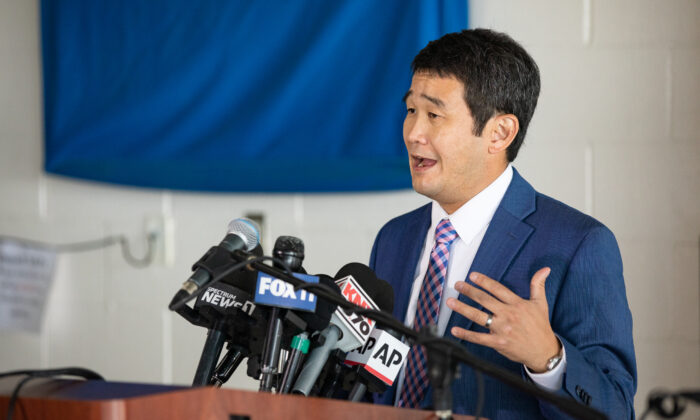 The event, called the “Spotlight on Crime Guns in California,” was held following a number of shootings across the country over the weekend, including Geneva Presbyterian Church in Laguna Woods, one at a grocery store in Buffalo, New York, and another at a flea market in Houston.

“This past weekend was a very painful reminder for all of us about the epidemic that is gun violence in the U.S.,” Erica Rice, program manager for Brady, said during the meeting.

“Unfortunately, so many of our communities of color are overly familiar with violence, and despite best efforts by our faith leaders or community advocates or elected officials, violence continues to plague specific neighborhoods and specific people,” she said.

Rice argued that if gun violence prevention was concentrated in those impacted areas, it could make a huge difference across the country, noting that half of all American homicides occur in just 127 cities and towns which contain only a quarter of the population.

Min, who has been a strong supporter of gun control since taking office in late 2020, said he is horrified by shootings like these and thinks legislation can help.

“The idea that a church in Laguna Woods of all places would be the host to this type of mass shooting, the host of national news, it’s unthinkable,” Min said.

“But that is the world we now live in. A world where no place is safe. The highways, our schools, our churches, our places of worship, our homes, our businesses, and whether it’s Buffalo or Houston or Laguna Woods we’re seeing the unfortunate fruit born of the fact that during the pandemic we saw a record number of guns be sold.”

In 2021, Min attempted to ban all gun shows on California state property, though ultimately only got them banned at the Orange County fairgrounds. This year, he is trying again for the statewide ban with Senate Bill (SB) 915.

Min is also attempting to pass SB 1384, which would require a number of oversight measures on California gun dealers, including requiring employees to complete regular training, require internal and external video and audio surveillance in gun stores, require security standards to prevent smash and grab robberies, as well as require dealers to carry $1 million in liability insurance to “ensure victims of criminal actions can be compensated.”

“SB 1384 is a critical bill because currently we don’t have any federal laws or regulations that require these types of safe business practices, these obvious prophylactic measures to try to prevent illegal purchases of guns or the theft of guns. There’s also no federal requirements regarding security standards, recording, or liability insurance too, so what we’re hoping to do with this bill is to create a set of best practices for gun dealers,” Min said.