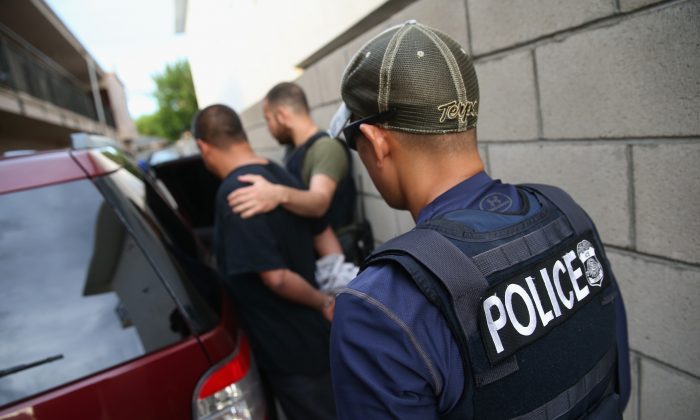 A man is detained by U.S. Immigration and Customs Enforcement (ICE), agents on Oct. 14, 2015, in Los Angeles, California. (John Moore/Getty Images)
US

The California Senate passed a sanctuary bill on April 3 that limits cooperation between local law enforcement and Immigration and Customs Enforcement (ICE).

The bill was passed 27–12 along party lines that saw Democrat support and Republican opposition.

Senate bill (SB) 54 prevents local jails from holding inmates for up to 48 hours extra when ICE requests it for transfer—except those who have committed certain crimes, such as murder, robbery, rape, or kidnapping.

The bill will now head to the Assembly, where Democrats hold a large majority, then to Gov. Jerry Brown. If passed, it will become effective immediately.

Nearly one quarter, or more than 2 million, of the country’s estimated illegal alien population live in California, according to the Public Policy Institute of California.