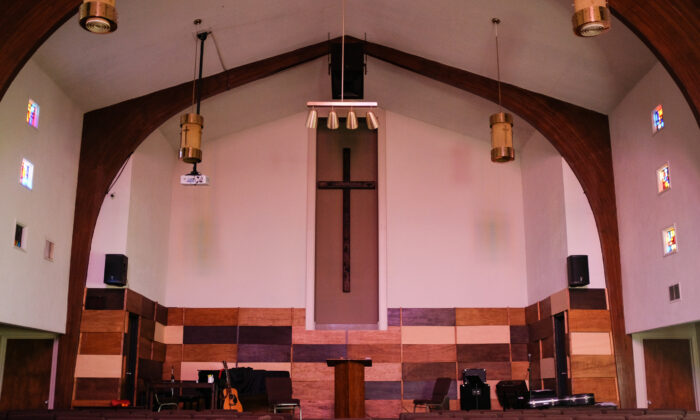 A bill that requires state and local governments to treat religious services as essential during a state of emergency was rejected by the California state Senate.

Authored by Sen. Brian Jones (R-Santee), the Religion is Essential Act bill was presented April 13 before the Senate Judiciary Committee. More than 50 speakers spoke in favor of the proposed legislation during the hearing, while only one caller voiced opposition.

“The process of the hearing actually went very good,” Jones told The Epoch Times in an April 14 interview following the bill’s defeat.

The proposal, Senate Bill 397, called for the right to practice one’s religion in one’s chosen house of worship to be deemed essential and treated no differently than other state-declared essential services such as shopping malls, fast-food restaurants, and Hollywood film production.

The bill would have prohibited the government from enforcing a health, safety, or occupancy requirement that imposes a substantial burden on a religious service during an emergency.

It would have allowed a religious organization that has been subject to state or local government overreach to file a claim for relief in an administrative or judicial proceeding.

The rationale for SB 397 has been bolstered by two recent United States Supreme Court decisions.

The high court ruled that while the state can impose reasonable safety restrictions and limitations, it can’t enforce an outright ban of church services if similar secular activities are allowed.

The court ruled that religious gatherings should not be treated any differently than secular gatherings.

Jones testified before the committee that the bill has received support from over 7,000 individuals across the state.

He quoted Justice Sonia Sotomayor from a February ruling: “They may restrict attendance at houses of worship, so long as comparable secular institutions face restrictions that are at least equally as strict.

“While I believe the court got these rulings right, to make sure that a future governor during a future emergency doesn’t try this again, we need to guarantee the right to practice one’s religion in state law. Senate Bill 397 will do this simply declaring that religion is essential and should be on equal footing with all other services and industries designated as essential during an emergency.”

The proposed legislation was defeated in the Senate Judiciary Committee on a 2–7–2 vote.

Jones was joined by Sen. Andreas Borgeas (R-Fresno) in supporting the measure.

Despite the vote split among party lines, Borgeas said the issue is not partisan, but constitutional.

He appealed to the First Amendment, prohibiting government infringement on the exercise of religion and peaceful assembly and ensuring equal protection of the law.

“I submit to you colleagues that I believe this is a First Amendment constitutional issue that invokes equal protection,” Borgeas said.

He said individuals should be able to gather at their places of worship if they abide by the necessary health regulations.

“If constitutional rights are considered essential in America, then being able to attend these activities on the sole condition that they are abiding by the prevailing health directives, that is a constitutionally protected essential activity. I’m not sure how you can get around that,” he said.

“I could not see a difference between going to Home Depot and going to church.”

Greg Chafuen, legal counsel for the Alliance Defending Freedom, testified to the judiciary that the bill treats religious gatherings as comparable to secular conduct.

“The bill protects the right of Californians to worship and to exercise their faith, especially in difficult times,” Chafuen said. “And it does this while still allowing the state to require compliance with neutral health and safety standards to protect the public.”

Jay Bhattacharya, professor of medicine at Stanford University and a research associate at the National Bureau of Economic Research, told the committee that if the bill passes and worship services are deemed essential, then it would provide an opportunity for public health officials to work with churches to worship safely.

He said that these directives have created an unnecessary conflict.

“In fact, if churches were deemed essential, public health could work with churches for safe worship, just like public health works with other essential businesses to operate safely during the pandemic,” he said.

“If you look at the CDC and the World Health Organization guidance on religious observance during a pandemic, both of them emphasize the importance of religious worship.”

Sen. Robert Hertzberg (D-Los Angeles) testified that the bill would limit the government’s ability to exercise its police force to protect the public.

“What’s articulated in this bill is that we’re basically turning over the police powers, the determination of what it should and shouldn’t do to the courts or eliminating executives irrespective of what their power is to make those determinations,” he said.

Hertzberg used the example of an active shooter in a neighborhood near a church. He said if the government wants to impose a curfew to protect people from getting shot, but people in church or another form of assembly didn’t want to abide by the curfew, then the government would be unable to exercise the police force.

“It would be impossible to run a government if your interpretation of the constitution, as set forth in this measure, was so strict—that literally, no matter what happened, you’d be too fearful that you could not engage the police power to deal with whatever the issue was because you’re too worried that this strict interpretation, or the laws written would eliminate your ability to do so,” he said.

Kat DeBurgh, executive director of the Health Officers Association of California, testified before the judiciary in opposition to the bill from a health-risk perspective.

“A worship service that involves being seated in a room for an hour or more cannot be treated the same way a store is treated, where people move around, get their business done and leave,” she said. “These risks are just not the same.”

She said the CCP virus, being a respiratory virus, is not the same as a bacterial infection that’s spread by touch and calls for different health measures.

“Each disease is different, and that is why public health measures may vary across time,” she said.

“There is already ample protection for worship services in California law and in the United States Constitution. This bill attempts to alter what is a fine balance between individual liberty and public health. And we think it’s dangerous to tilt the balance this far.”