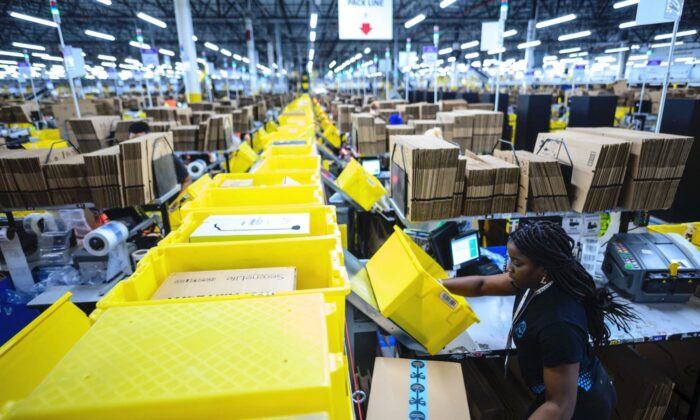 A woman works at a packing station at the 855,000-square-foot Amazon fulfillment center in Staten Island, one of the five boroughs of New York City, on Feb. 5, 2019. (Johannes Eisele/AFP via Getty Images)
US News

The California Senate on Wednesday passed a landmark bill that would require warehouses to disclose productivity quotas and ban any such targets that endanger the health and safety of workers.

The first-of-its-kind legislation, known as AB 701 and introduced by Democrat Lorena Gonzalez, passed on a 26-11 vote. If signed into law by Gov. Gavin Newsom, warehouse distribution centers such as Amazon would be required to provide workers with quotas detailing the tasks that need to be completed within a certain timeframe.

It would place limits on production quotas that would prevent warehouse workers from using the bathroom when needed or from taking breaks they are entitled to. The bill also offers new protections for workers who raise concerns about unreasonable quotas.

Amazon employees have reportedly had to pee in bottles while at work due to such quotas—allegations that the company denies—meanwhile, former Amazon worker Yesenia Barrera claimed she was “fired by an algorithm for going to the bathroom” in 2019.

Proponents of the legislation say it could help address power imbalances between workers and employers and ultimately lead to similar regulation in other industries, while critics have called it too broad and misguided due to the focus on quotas.

“AB 701 has passed the Senate! The bill is the first attempt to create transparency & protections against unsafe algorithmic-enforced quota systems used by corporations like @amazon to push warehouse workers’ bodies to the breaking point. #WorkShouldntHurt,” California Assembly Member Gonzalez said on Twitter on Wednesday.

She previously said that more needs to be done to ensure that warehouse workers “remain safe.”

While the bill covers the entire warehouse sector, Gonzalez said Amazon had pioneered a combination of worker surveillance and algorithm-led management that allows employers to set unsafe productivity goals, and quickly dismiss workers who fall short.

The legislation will face a final “concurrence” vote in the Assembly before heading to the governor’s desk.

The Epoch Times has reached out to Newsom’s office for comment on whether the governor intends to sign the bill into law should it reach his desk.

Barrera, 22, who spent five months working at an Amazon warehouse in Southern California, said she was fired by the company after being warned once about spending too much time in the bathroom.

She claimed that she wasn’t informed that she had lost her job, but found that her pass had been deactivated after turning up for work one day.

“I was working as hard as I could, but a supervisor gave me one warning,” Barrera said. “One day I showed up, and I wasn’t allowed in—like I was fired by an algorithm for going to the bathroom.”

Amazon is now the second-largest employer in the United States, with over 950,000 workers nationwide. The company has drawn scrutiny for its labor conditions, practices, and its workers’ injury rates.

Veena Dubal, a labor law and technology expert, told NPR that the bill is the “first step in changing working conditions in the warehouse.”

Some business groups meanwhile have suggested that the true nature of the legislation is to boost labor organizing efforts.

“If there is a business that is not living up to the workplace standards, they should be held accountable—we don’t disagree with that,” Rachel Michelin, head of the California Retailers Association told NPR. “But do we need this broad, sweeping legislation … that impacts every aspect of the supply chain in California? I don’t think so.”

Amazon didn’t immediately respond to a request for comment by The Epoch Times.