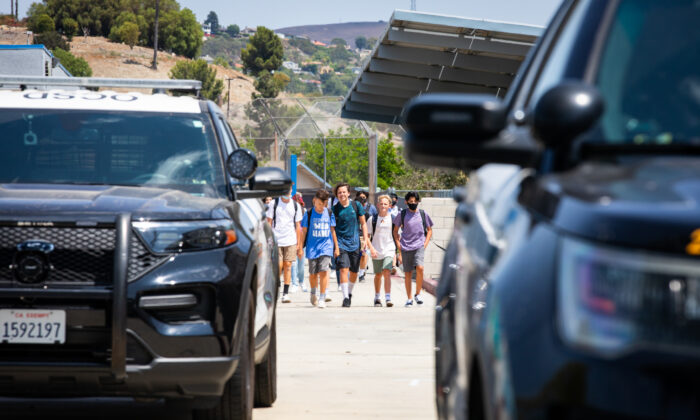 California schools were on heightened alert Dec. 17 after school shooting threats were circulating nationwide on TikTok and other social media.

It is unclear where the anonymous and vague school threat first originated from but the posts warn of shootings and bomb threats at schools around the country on Friday.

“While there is no reason to believe our schools are in danger, please know we take all such threats very seriously,” according to a district statement.

The U.S. Department of Homeland Security also said Friday it has no evidence of credible threats but urged the public to “remain alert.”

South Lake Middle School in Irvine went on lockdown after police were informed of a student brandishing a gun, according to the Irvine Police Department.

The school entered a partial lockdown while police uncovered a toy pellet gun, according to the department.

Prior to Friday’s false alarm scare, the Irvine Unified School District released a statement on Thursday acknowledging the circulating shooting threats, but reassured parents there has been no threat in relation to the school district.

Out of caution, the Irvine Police Department increased its security presence around campuses on Friday, department Spokeswoman Karie Davies told The Epoch Times.

North Monterey County High School in Castroville issued a shelter in place order around noon on Dec. 16 while the threat was being investigated by the school and local authorities.

The school lifted the lockdown around 2 p.m., reporting no legitimate threat was found.

As Orange County received no specific threats to schools, the sheriff’s department will be on standby if an incident occurs.

“There are no specific threats to [Orange County] schools that our department are made aware of,” Orange County Sheriff’s Department spokesperson Ryan Anderson told The Epoch Times. “We are continuing to work with school officials and law enforcement to monitor incident throughout the day.”

Westminster School District also issued a statement on Thursday stating the schools have not received a targeted threat, but school resource officers would be on standby Friday if needed, according to the district website.

The Seal Beach Police Department reassured members of the community on Thursday that law enforcement agencies determined the threat was not credible.

“We encourage personnel and our school partners to maintain vigilance and report any suspicious activity,” the Seal Beach police department said in a statement.

While the threat has been determined by most schools to be superficial, notices were issued to families throughout the state warning of the potential threat.

The Santa Clarita Valley Sheriff’s station wrote on Twitter that it was “aware” of the nationwide threat against schools and that “at this time no credible threats have been identified,” but would continue to provide additional patrol checks throughout schools.

The district further said state and local law enforcement officers investigated the threat and determined it was “not credible.”

Meanwhile, a teenage boy was in custody in Corona Friday on suspicion of posting threats of violence directed at his Corona middle school.

The 14-year-old was taken into custody at his home Wednesday by school resource officers assigned to area high schools after a student at Auburndale Intermediate School reported receiving a threat on social media regarding a possible attack at the school on Thursday, said Cpl. Tobias Kouroubacalis, a police department spokesman.

Kouroubacalis said the boy’s parents were cooperative and no weapons were found at the home. The teen was taken to the Riverside County Juvenile Hall.

In response to the threats, TikTok released a statement on Twitter saying there was no evidence of a threat. Rather, videos of students warning of potential violence were uncovered on the social media platform.

“We handle even rumored threats with utmost seriousness, which is why we’re working with law enforcement to look into warnings about potential violence at schools even though we have not found evidence of such threats originating or spreading via TikTok,” TikTok wrote on Twitter.