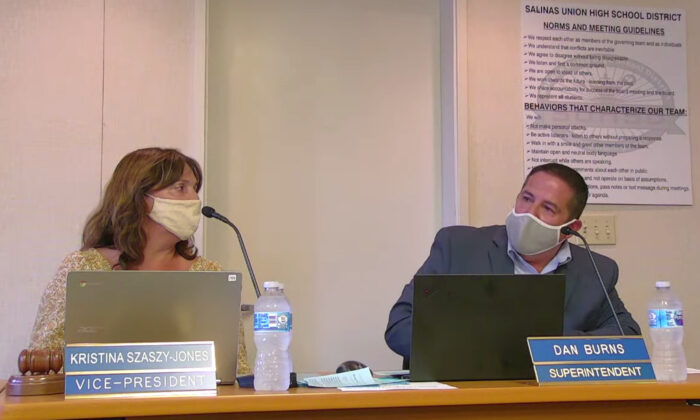 Kristina Szaszy-Jones (L), vice president of the Salinas Union High School District Board, and Dan Burns, superintendent at SUHSD, at a board meeting in Salinas, Calif., on Aug. 10, 2021. (Screenshot via YouTube/SUHSD Official)
Southern California

A teacher who resigned her position at Rancho San Juan High School in Salinas, California, and moved to Florida this year after she said she was threatened and bullied on social media for opposing critical race theory (CRT) claims the school board has refused to read her public comments at meetings.

Kali Fontanilla told The Epoch Times that the Salinas Union High School District (SUHSD) hasn’t read her letter aloud during public comments since she submitted it to the board on July 13.

The letter, obtained by The Epoch Times, criticizes school board president Phillip Tabera, who attacked opponents of CRT on social media after a raucous June 22 board meeting at which he was called a racist.

“As a reaction to the many parents that spoke up and my own voice as a black teacher in the district, your board President, Phillip Tabera, stated publicly on Facebook the day after the meeting on June 23rd that the ‘anti people of color came out last night,’” Fontanilla wrote.

“I am disgusted and insulted that he would say such derogatory words about those that were brave enough to speak up about this indoctrination happening in the classroom,” she wrote. “Some of those that spoke up were people of color, including myself. To be told that we are ‘anti people of color’ because we are against the district forcing all of our students to receive lessons that are racist and divisive is disgraceful.”

Meanwhile, information obtained through the Public Records Act indicates SUHSD dismissed “the actions and public comments” of parents opposed to CRT and ethnic studies at its June 22 board meeting as “part of a national, coordinated action inspired by right-wing, conservative media and political institutions.” The memo included links to “Politico” and the “Republican Study Committee.”

SUHSD then listed “Our Values,” with links to its resolutions on Black Lives Matter, civic literacy and engagement, and DACA legislation, among others.

California lawmakers have proposed Assembly Bill 101 (AB 101), which would make the state’s ethnic studies modified curriculum (ESMC) a graduation requirement for all high schools students. SUHSD has already implemented its own ethnic studies program for all ninth-grade students ahead of the proposed state legislation.

Fontanilla said Tabera “should be removed from his position immediately for discrimination and racism.”

She also blasted Burns for denying that the ethnic studies curriculum is based on CRT.

“I’ve also seen the way the district superintendent has denied that critical race theory is being taught in our schools to the press. This is a complete lie! He is not being transparent to the public and the parents who have kids in our schools,” Fontanilla wrote.

“To deny that critical race theory is inserted into these lessons is completely dishonest!”

Fontanilla said ethnic studies is not a history lesson or study of different cultures, but rather “pure divisive and racist brainwashing.”

Students are a “captive audience” who should not be forced to study CRT in order to graduate, especially without their parents’ knowledge or consent, she said.

Burns said at the school board’s Aug. 10 meeting that SUHSD would no longer hear public comments about CRT or ethnic studies, after controversy erupted over those two issues at meetings this summer.

He announced that, “without desiring to change the current course pathway of ethnic studies as a requirement,” the school board “will not take public comments on these two topics in the future until there’s a future debate about this again. We’ve heard concerns from both sides. We appreciate the support of both sides in the debate and in the future, we’ll announce if we’re going to have this conversation further.”

But at the school board’s Aug. 24 meeting, dozens of students and parents spoke in favor of CRT and ethnic studies after Salinas High School students were accused of posting crude photos of a black baby doll online on an Instagram account.

She suggested SUHSD might be violating the Brown Act, which requires meetings to include a general comment period where the public is allowed to comment on anything of interest that is under the jurisdiction of a local government body.