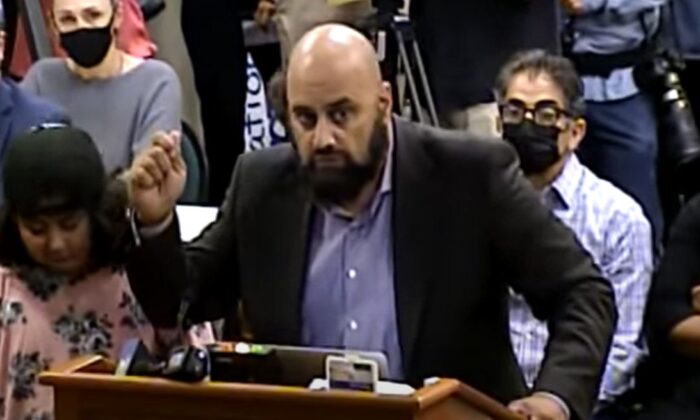 A school board in Northern California faced intense backlash from parents this week after a high school teacher apparently bragged on camera that he wanted to turn his students into revolutionaries, had a poster of Chinese communist tyrant and mass murderer Mao Zedong on his wall, and had an Antifa flag.

The Natomas Unified School District, located in Sacramento County, confirmed Wednesday it put a teacher on leave and is now taking action to fire him, according to a statement from the district (pdf). The board didn’t make mentions to the teacher, but he was identified in other reports and in an undercover Project Veritas video as Gabriel Gipe.

“Yesterday, a group released an undercover video that has been covered extensively. In this video, a teacher at Inderkum High School was recorded sharing his educational approach that is disturbing and undermines the public’s trust,” the statement said.

But on Wednesday, a number of parents appeared in front of a Natomas school board meeting and vented their frustration that a teacher would have a poster of Mao, the founder of the Chinese Communist Party who is estimated to have caused the unnatural deaths of tens of millions of people and orchestrated the Cultural Revolution. The Project Veritas video alleged to show the inside of the teacher’s classroom, which included a poster of Mao.

Meanwhile, Mao’s failed Great Leap Forward, which triggered a widespread famine, has been described by some as the “worst mass murder of all time,” killing upwards of 45 million people.

“You feel this pain right here? It’s not going away. The only question I got is where does the [expletive] buck stop?” asked a man during the board meeting on Wednesday. He added to applause from the audience: “This is bigger than one teacher … there were so many red flags. The man had an Antifa flag behind his desk. He had Chairman Mao in the [expletive] corner. Are you kidding me?”

Said a woman at the board, “The reason why my daughter is standing behind me is because my job as a parent is to protect her from anybody that has ill will towards her.”

The unnamed woman said her daughter was either in Gipe’s class or in contact with him.

“In two weeks and 13 days, he was allowed to change my daughter’s mind about some fascist [explicative] that y’all have let in this school,” the woman said.

“Any teacher or staff pushing anti-American, hateful political agendas against America on our students, families, work communities—we want you out now,” parent Paizly Gomez told the school board. “Not paid leave, and not in a week or two. Now.”

“I’m outraged. Of course, I’m furious about this,” another parent said. “As you guys sit up there behind your bureaucracy—I blame the leadership from the top down.

Another parent said that the school board, principals, and other teachers are “criminals” and “co-conspirators” in allowing Gipe to teach there, adding that communist regimes are “evil.”

Meanwhile, superintendent Chris Events told KCRA-3 that Gipe had informed him the Project Veritas video was heavily edited, although it’s not clear how.

The district has since removed the posters from Gipe’s classrooms, as wells as stamps with images of mass-murdering Soviet dictator Josef Stalin “with an insensitive phrase,” North Korean leader Kim Jong Un, “and others,” according to the statement. Project Veritas’s footage also appeared to show the red-and-black Antifa flag displayed on his classroom walls.

Gipe also told an undercover Project Veritas member that he would motivate his students to actively participate in left-wing events, adding that he worked with the PSL—apparently referring to the Party for Socialism and Liberation—and other groups. What’s more, he claimed there are more teachers who have similar viewpoints as he does teaching at the school.

The Epoch Times has contacted the Natomas Unified School District for additional comment.