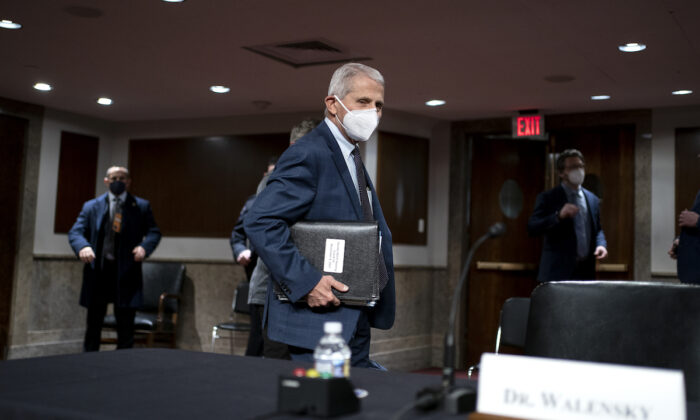 Okay, that’s a clickbait headline… so beat me up in the comments.

I’m in a bad mood and woke up on the wrong side of the bed this morning after the president called me and half of the country “semi-fascist.” I didn’t think it was possible for him to break his own record for projection, but he managed it.

Nevertheless, Dr. Anthony Fauci should be in big trouble. No wonder he’s retiring. Otherwise, he’d be courting arrest or at least license revocation in California, considering legislation just passed by their senate by an overwhelming 32–8. It had already been approved by the state assembly with all Republican members (like the true “semi-fascists” they are) voting no.

The legislation, Assembly Bill 2098, targets doctors who promote what these legislators choose to call COVID-19 “misinformation.”

In other words, doctors who dare to challenge the force-fed medical doctrines of the state will be effectively banned from the profession and their knowledge and research deemed too dangerous for public consumption. They would become virtually medical “untouchables” in our most populous state.

That would likely include medical miscreants such as Drs. Robert Malone, Scott Atlas, Jay Bhattacharya, Harvey Risch, Joseph Mercola, and Peter McCullough, to name just a few, all of whom, I would wager, have IQs in the vicinity of thirty points above most members of the California State Assembly or Senate, not to mention the state’s governor who soon enough will be signing this head-on assault not only on the First Amendment but the human mind in general.

Save your old copies of The Epoch Times. They may soon be banned in California as well, turned into Soviet “samizdat,” because all of the above doctors have appeared here in printed and video form.

And do these legislators have anything specific to say about what exactly is “misinformation,” and what is the so-called “settled science” (oxymoron alert) on the issue?

Not likely. For a good wannabe Stalinist that could only interfere with the true object: punishing and/or controlling your enemies.

So all we have is: “It shall constitute unprofessional conduct for a physician and surgeon to disseminate misinformation or disinformation related to COVID-19, including false or misleading information regarding the nature and risks of the virus, its prevention and treatment; and the development, safety, and effectiveness of COVID-19 vaccines.”

There’s also some exceptionally banal legal blather about doctors and “public trust” that is intended to guide whatever state-sanctioned committee decides—in the grand tradition of the Spanish Inquisition—the fate of these physicians who are supposedly misguiding the public.

Dr. Fauci, at one time or another, recommended all of the above in less than two years, and that’s barely getting started. It was hard to keep up, but most of our esteemed medical institutions managed to do it. They knew where their bread was buttered.

(How about the unvaccinated Novak Djokovic doesn’t get to play in the current U.S. Open when throngs of—no one knows how many unvaccinated—illegal immigrants stream over our southern border daily? What consistency!)

And now the California legislature has seen fit to legislate medical science in much the same manner Stalin peremptorily rejected Mendelian genetics during the notorious era of Trofim Lysenko. (How many of them have actually heard of that? I would wager very few.)

Has there ever been such scientifically lame-brained legislation enacted in this country? I’m not sure there has ever been anything this anti-science since the trial of Galileo.

California has now placed itself in direct competition with communist China for the world leader in state control. The car you drive must be electric. You can only consume certain medical information. You go to school in a certain manner. You learn certain things.

No wonder Brian Wilson—who literally invented California for the world back in the day—went crazy.