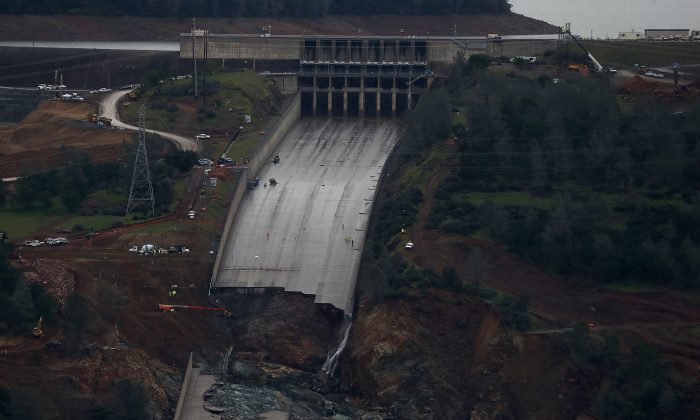 YUBA CITY, Calif.—A resident filed an injunction to prevent construction blasting using explosives near the Oroville Dam on March 22 at Butte County Superior Court, after becoming worried the public work could cause the collapse of the dam.

The injunction was filed by plaintiff Paul Preston against defendant California Department of Water Resource (DWR).

Oroville Dam, which sits at 770 feet, is the tallest in the United States, 44 feet higher than the Hoover Dam. The collapse of the dam could potentially cause the loss of billions of dollars of property and tens of thousands of lives.

This is not the first time people have voiced concerns about the dam. In February 2017, Butte County Sheriff ordered an emergency evacuation of more than 100,000 residents, based on a near-disaster assessment of possible dam collapse caused by liquefaction.

This year, residents have been closely watching the dam and its spillways, and they have again found water seepages on the surface of the spillway pavement.

Dam Failure ‘Not Due to Natural Disaster’

Preston, in the document for his injunction court filing, claimed that “2017 failure of Oroville Dam [was] not due to natural disaster.”

The document included a long list of reasons to support Preston’s claim, including the 2017 FEMA conclusion that “DWR has not provided sufficient documentation to demonstrate that the Upper [spillway] Chute was damaged as a direct result of the [natural] disaster.”

After filing the injunction, Preston told The Epoch Times that many of his neighbors were very concerned about the dam’s safety.

Preston is a radio talk show host at the Agenda 21 radio station and has been closely following news of the dam. After he received the notice from DWR on Friday’s scheduled explosive blast, he decided to take legal action against DWR in court.

Whitmore said that the scheduled Friday blast was a normal operation as a part of the ongoing reconstruction of the two spillways. She said there are rocks and boulders near the spillway that need to be blasted apart so that the construction team can revegetate the hillside.

The Epoch Times was later told by plaintiff Preston that after the injunction was filed Friday around noon, the scheduled blast did not happen.

Preston said that a court hearing was scheduled on Monday, March 25.

Lake Oroville, with the capacity of storing more than 3.5 million acre feet of water, is the second largest man-made lake in the state of California. The dam was built by the California DWR in the 60s.

In Oct. 2017, the DWR was given the tongue-in-cheek California Golden Fleece Award (CGFA) for its mismanagement of Oroville Dam with an alleged “patch and pray” approach to dam safety.

The CGFA award is given out quarterly by The Independent Institute (TII) to California state or local agencies or government projects that swindle taxpayers or break the public trust. TII is a non-profit and non-partisan public policy research and educational organization based in Oakland, California.

California has been reportedly under heavy rain and snow in the spring of 2019. Watts Up With That (WUWT), which claims to be “the world’s most viewed site on global warming and climate change,” reported on March 3 that California snowpack was 185% of normal.

This year’s heavy snowpack, with the ongoing repair of 2017’s near-disaster condition on the dam, has brought many concerns to the residents living in the downstream areas of Oroville Dam.