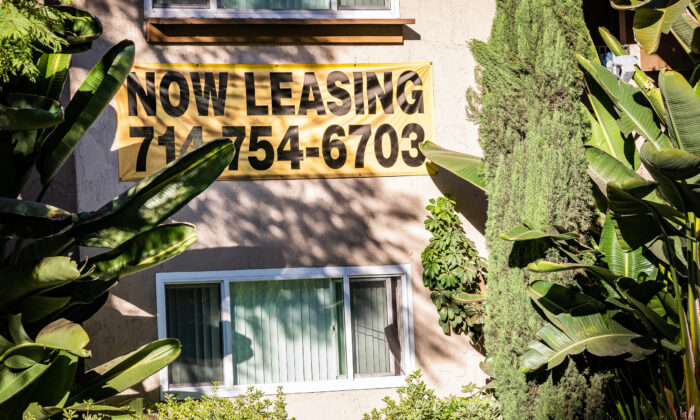 The average rent price in California has risen in the past year, making California the most expensive state to live in, according to a study released last week from Apartment Guide, an apartment search engine.

The average monthly rent for a two-bedroom apartment increased from $2,652 to $3,097—about a 17 percent increase.

The cities that had the biggest increase in one-bedroom rents were Long Beach, Riverside, Huntington Beach, and Irvine.

Among those, Long Beach had the highest price increase at 64.4 percent for an average of about $3,000 a month for a one-bedroom.

Ava Bombio, a 24-year-old Torrance resident who lives with her family, said the person who recently bought her apartment complex slightly raised the rent.

She said her mother has been working two jobs to pay for it, and now the family is planning to move to Texas.

“The cost of living in California is getting out of hand,” Bombio told The Epoch Times. “To afford an apartment, you have to be making probably at least $30 per hour, which is way too high considering a lot of places [only pay] minimum wage.”

Thomas Yan, a college student who has been living for four years in a one-bedroom apartment in Torrance—about 20 miles south of Los Angeles—said his rent started at about $1,700 and is now closing in on $2,000, after two increases.

He said he will be moving this month due to the high cost of rent.

“I’m planning to move before January 2022. I am going to look for an apartment again and hoping to get a place around $1,600 to $1,700,” he said. He said that once he graduates in June, he might look to buy a home—with his parents’ help—in a different state.

Janine Baxiu, a Westwood resident who rents a studio apartment, said she lost her job amid the pandemic, is struggling, and has begun looking for a less expensive location to rent.

“I was really having a hard time,” Baxiu told The Epoch Times. “So I stopped using my electricity.”

Baxiu said she recently was approved to receive COVID-related rental assistance for the next three months, which will bridge the gap until she finds her next place.

Ulices Hernandez, who currently lives in El Monte—about 20 minutes east of Los Angeles—and works in hotel management, said he moved into his current two-bedroom apartment with his kids and wife three years ago at a little over $2,000 per month.

He said his rent is reasonable because he has a stable job.

“Some people [in] my field lost their jobs, but fortunately, not [me],” Hernandez told The Epoch Times. “I don’t feel any pressure.”