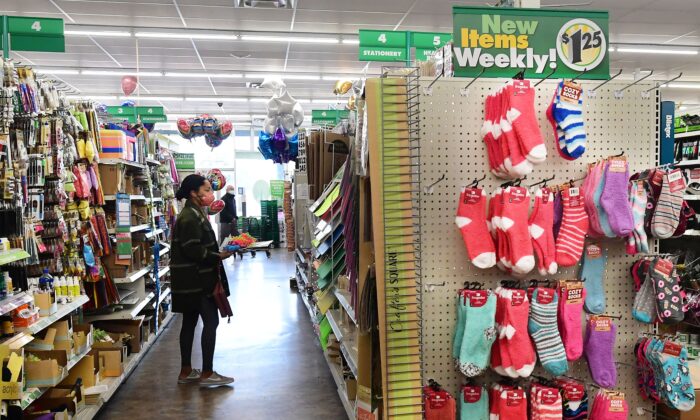 A woman shops at the Dollar Tree store, where $1.25 price tags are now posted on the shelves, in Alhambra, Calif., on Dec. 10, 2021. (Frederic J. Brown/AFP via Getty Images)
Viewpoints

A recession is hitting California. The only question is how hard it will be.

The July Finance Bulletin by Keely Bosler, director of the California Department of Finance, calculated that for personal income tax (PIT), “Cash receipts for June were $3.345 billion below the forecast of $16.939 billion.” The actual receipts were $13.594 billion.

Receipts vary month to month because of when people file their tax reports. So it’s best to compare a particular month to the same month in the previous year.

The expected $97 billion surplus would be only $55 billion. All that surplus money Gov. Gavin Newsom and the legislature promised to spend in June would have to be cut by $42 billion.

And this recession is only starting, its depth unknown. If the PIT receipts drop by another $42 billion, the surplus is slashed to $13 billion.

Fortunately, the Enacted Budget report states that it “includes $37.2 billion in budgetary reserves.” If a $29 billion deficit were deducted from that, only $8.2 billion in reserves would be left.

I’ll haul up there with the numbers because we’re getting into too much speculation.

But the point is that the state’s $97 billion surplus could evaporate faster than a 7-Eleven 32-ounce Big Gulp poured on the concrete at noon in July in Needles, California.

This has been the spastic pattern for decades, especially since the state became a high-tech center. Good years bring record profits, dividends, and spending by the wealthy tech titans. Bad years bring slowdowns and even bankruptcies.

Yet the state never uses the surpluses sensibly as a bridge for tax reform that would even out the ups and downs.

“News of layoffs and hiring slowdowns have become commonplace across Silicon Valley,” the article reads. “Start-ups are saying capital is drying up.”

One reason the tech companies go in big cycles is that purchases of their products can be postponed. People have to eat, but the new iPhone purchase can be postponed, and the Netflix subscription can be suspended.

The July 2022 Department of Finance Bulletin also calculated that “California real GDP [gross domestic product] contracted by 1 percent in the first quarter of 2022 on a seasonally adjusted annualized rate (SAAR) basis, following 9.5-percent growth in the fourth quarter of 2021 and annual growth of 7.8 percent in 2021.”

A negative second quarter would indicate a recession.

June inflation hit 9.1 percent, the highest in four decades. Some analysts think it will subside. But even if it goes down to, say, 6 percent, that’s still a big problem.

There’s also the question of the real inflation rate. The calculations were changed three decades ago by the Clinton administration in order to make itself look better. The site ShadowStats, which calculates using the old formula, pegs the “corrected” number at 17.3 percent, the highest in 75 years.

If you’ve filled up your car lately or bought hamburger, you know the ShadowStates figure is more accurate than the official government number.

Meanwhile, on July 27, the Federal Reserve Board raised interest rates again by 0.75 percent to a range of 2.25 percent to 2.50 percent. It’s supposed to dampen inflation. If it doesn’t, then more rate hikes will be coming down the pike.

That’ll mean an even worse recession. I hope you’re ready. The state of California is not.