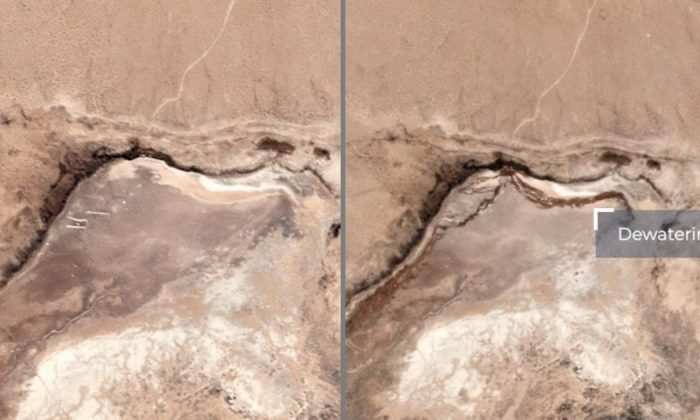 A devastating earthquake that hit Southern California on July 6 left a hole in the ground that was so big it could be seen from space, images captured by an Earth imaging company have revealed.

Planet Labs has released surprising before and after satellite images of a surface crack appearing in an undeveloped area near Ridgecrest in the Mojave Desert, 150 miles north of Los Angeles.

“Ridgecrest Earthquake before (4th July) and after (6th July) images from Doves [satellites] clearly showing surface rupture,” Planet Labs Co-founder and CEO Will Marshall said in a post on Twitter.

The 7.1 magnitude quake caused buildings to shake, water mains to break, power outages, and ruptured gas lines that caused building fires in Ridgecrest as well as other high desert communities across Southern California.

#RidgecrestEarthquake
This view from above by KCSO Air Support Unit shows the damage to Hwy 178 from the earthquake.
Senior Deputy Riggs also shows the line you can see on the desert floor caused by the earth moving. This video was captured this weekend after both earthquakes. pic.twitter.com/1HUMReoMdJ

The tremor came just 34 hours after an earlier 6.4 quake that struck the same area. Ridgecrest has a population of about 27,000 people.

All roads damaged by the quakes have already been repaired and reopened, according to Reuters.

The state Office of Emergency Services (OES) confirmed there were only minor to moderate injuries.

“No reports of any fatalities so I think we’re very lucky there,” OES Director Mark Ghilarducci told Reuters.

California Governor Gavin Newsom put the OES on its highest alert level and even asked President Trump for a presidential emergency declaration.

“I have full confidence that the president will be forthcoming, in immediate terms, with the formal declaration,” Newsom told Reuters.

Officials warn there could be a high number of aftershocks, possibly including powerful ones, and asked residents to stock up on supplies.

“I’ve said this ad nauseam: be prepared for the worst,” Newsom said.

Preparedness is key. Have an emergency plan, emergency kit & know what to do when the ground shakes. Drop, Cover & Hold On. More info: https://t.co/PM7iJVRQFn pic.twitter.com/k4GNJcROT2

Ridgecrest disaster victim Sierra Wood described the damage to her home as heartbreaking and terrifying.

“This is the first time I’ve ever seen anything like this,” she told Reuters. “I mean—they say that it’s happened and you’ve heard about it but once you’re in it, it’s completely different, it’s terrifying.”

Husband Keith Wood was waiting for the aftershocks to finally pass.

“It’s like when, when do we get a break from it?” he told Reuters. “When is enough? Mother Nature has had her way, give us a break now, okay?”

The nearby U.S. Naval Air Weapons Station China Lake (NAWSCL) was evacuated of all non-essential staff after the quake.

The facility, which spans more than 1.1 million acres and measures larger than the state of Rhode Island, reported no injuries.

“NAWSCL is not mission capable until further notice,” NAWSCL said on Facebook. “The base continues to assess damages to infrastructure aboard the installation and continues to allow access for mission essential personnel only … safety of personnel is currently the highest priority.”