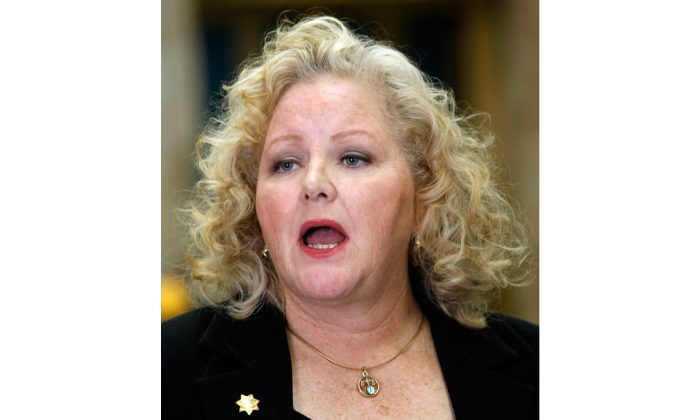 OAKLAND, Calif.—Seven current and former San Francisco Bay Area police officers will be charged in a sexual misconduct scandal involving a teenager who was later arrested in Florida in an unrelated assault case, a prosecutor said Friday.

The wide-ranging scandal surfaced in June when the teenager, who described herself as a prostitute, said she had sex with about 30 law enforcement officials in Oakland and elsewhere in the region.

Alameda County District Attorney Nancy O’Malley said Friday she was waiting until she’s certain the teen can be returned to California before filing charges against the officers.

The teen was jailed in Florida on suspicion of assaulting a guard at a drug treatment center where she was living.

O’Malley criticized the Richmond Police Department for helping arrange for the teen, now 19, to stay at the center on the other side of the country, saying her unavailability could hurt the prosecution if she is unable to testify.

The teen has said she had sexual encounters with six Richmond police officers and two dozen other law enforcement officials, including some from Oakland, during the past two years.

The teen said she had sex with four officers before she turned 18 and sometimes traded sex for protection from arrest or tips about planned prostitution stings.

The other four suspects will face misdemeanor counts of engaging in prostitution and unauthorized access of a confidential criminal justice database, O’Malley said.

Efforts to reach the officers were not immediately successful, and it’s unclear if any of them are represented by attorneys.

Barry Donelan, president of the union representing Oakland officers, didn’t return a call or respond to an email seeking comment.

The union said in a prepared statement that it was disappointed by the scandal and assured residents the majority of officers are hardworking and upstanding.

The ever-deepening scandal has thrown the Oakland Police Department into crisis and put dozens of officers under suspicion.

The saga began in September when Oakland officer Brendan O’Brien killed himself, leaving behind a suicide note discussing the relationships that he and other officers had with the teen.

In March, a federal judge with oversight of the troubled department said he was dissatisfied with the internal affairs investigation and ordered a re-examination of O’Brien’s suicide.

In June, the teen told The Associated Press and other media outlets that she had sex with four officers when she was younger than 18.

O’Malley said her investigation was limited to Alameda County but authorities had found evidence that the teen had sex with police officers in other jurisdictions in San Francisco, Contra Costa and San Joaquin counties.

O’Malley also said the teen had friended “many, many” officers on social media and a large number of them engaged in sexually charged exchanges online.

O’Malley said those exchanges were “morally reprehensible” but not crimes.

The Associated Press generally doesn’t identify people who say they are victims of sex crimes.

Oakland Mayor Libby Schaaf previously said disciplinary action has begun against a dozen officers in the city, including dismissal proceedings against four.

Seven will serve a range of unpaid suspensions before being allowed to return to duty and another will be required to attend training classes.

The Oakland department previously said two officers implicated in the scandal have resigned in addition to O’Brien’s suicide.

The department cycled through three chiefs in 10 days in June after the allegations were first reported in the media.

A Livermore officer who had been on administrative leave resigned Thursday after seeing the results of the investigation by his department.