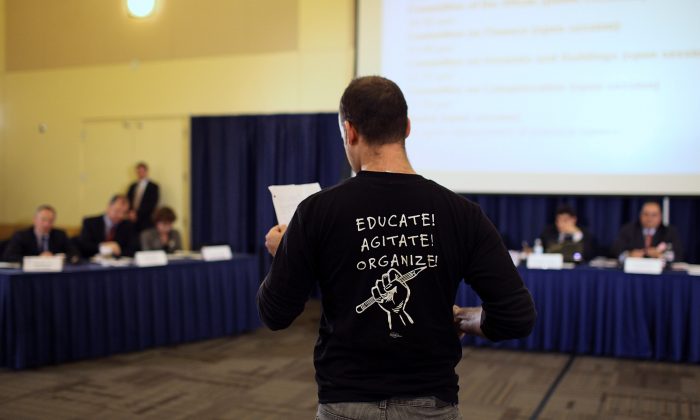 California Professor Who Said Police ‘Need to Be Killed’ Is Admonished, Faces no Further Action: Reports

A California professor who said, police “need to be killed” has been admonished by his university, but will face no disciplinary action, according to reports.

English professor Joshua Clover, whose specialisms include Marxism, critical theory, and poetry, has made various statements advocating violence against the police, exposed in a recent report in the California Aggie.

Following the shooting death of a local rookie police officer last month, the reporter at the university paper remembered rumors of a professor who “thinks cops should be killed,” and unearthed tweets and remarks from several years ago.

Asked the question “What’s wrong with society today?” in an interview published on Sept. 17, 2015, Clover gave a two-sentence response: “People think that cops need to be reformed. They need to be killed.”

According to Fox, on Nov. 27, 2014, he wrote on Twitter,  “I am thankful that every living cop will one day be dead, some by their own hand, some by others, too many of old age #letsnotmakemore”

A UC Davis professor reportedly wrote to a student newspaper, saying, “I think we can all agree that the most effective…

Clover responded to a request for comment from the Aggie, writing, “I think we can all agree that the most effective way to end any violence against officers is the complete and immediate abolition of the police.”

Clover suggested the reporter “direct any further questions to the family of Michael Brown.”

According to the Sacramento Bee, Clover responded to an email request for comment, writing, “On the day that police have as much to fear from literature professors as black kids do from police, I will definitely have a statement.”

“The UC Davis administration condemns the statement of professor Clover,” read a statement to The Sacramento Bee from UC Davis spokeswoman Dana Topousis. “It does not reflect our institutional values and we find it unconscionable that anyone would condone much less appear to advocate murder.”

Topousis said the university has not received any complaints regarding Clover indicating a possible violation of the Faculty Code of Conduct.

‘A Law Enforcement Officer Is Not a Protected Class’

“Public statements like those made by professor Clover are accorded a high level of protection under the First Amendment,” Topousis said.

UC Davis Provost Ralph Hexter told the Aggie that the remarks had not violated the standards of academic freedom set by the University of California and UC Davis.

“The basis for academic freedom is to make sure that the university is a place where unpopular and different views are heard,” Hexter said. “I think that teaching controversial subjects is always a challenge, and you have to maintain a space as a faculty member so that views you might very much disagree with can be expressed by the students, be respected and be challenged, but according to bases in fact and logic.”

Hexter indicated that staff in the humanities, like Clover, are given more leeway than professors in other disciplines.

Hexter said that while he found Clover’s tweets and published interview “odious,” he should be protected from sanctions on the basis of free speech and freedom of expression. “Our practice has not been to discipline people for things that they say outside the university,” he told Irwin.

Saying something against a protected class—such as race, gender, sexuality—would be another kettle of fish.

“If you say something against a protected class, and it would impact the individuals on campus, that opens it up to a different line of consideration,” Hexter said. “Being a law enforcement officer, or hoping to be, is not a protected class.”

Other humanities professors have been disciplined in similar cases in other universities.

John Jay College in New York places an emphasis on law enforcement and local justice. A professor at the college who sent a tweet that it was a “privilege to teach future dead cops,” was fired.

A professor at the University of Delaware was dismissed after calling Otto Warmbier, the American student imprisoned in North Korea who died upon release, a “clueless white male” who “got exactly what he deserved.”