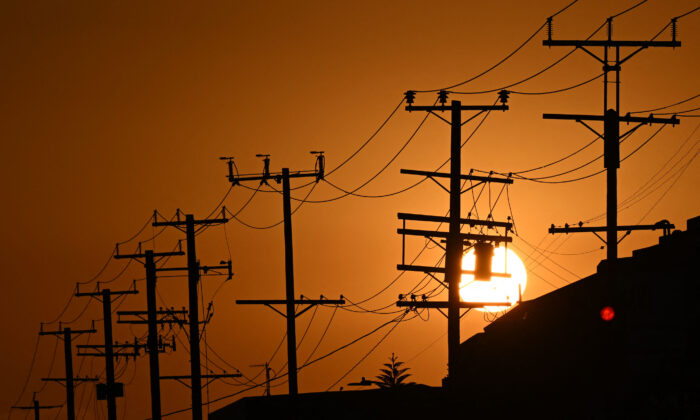 The sun sets behind power lines near homes during a heat wave in Los Angeles on Sept. 6, 2022. (Patrick T. Fallon/AFP via Getty Images)
Northern California

Officials from the California Independent System Operator (CAISO) confirmed Wednesday that despite reaching record-level power demand, operators did not need to order rolling blackouts Tuesday evening. However, CAISO did confirm that a handful of utility operators moved ahead with rolling outages anyway, saying “miscommunication” led some providers to believe outages had been requested.

“We did not need, nor was it our intention to signal the need for rotating outages,” President and CEO of CAISO Elliot Mainzer told reporters Wednesday. “We’ll work with [utility operators] to make sure there is no miscommunication at all tonight.”

Shortly after 5 p.m. Tuesday, CAISO issued a level three Energy Emergency Alert, which warns utility providers to prepare to trigger rolling blackouts, though it does not officially order outages to begin. Some providers, including Palo Alto Utilities and Alameda Municipal Power, went ahead with initiating some rolling outages even though CAISO did not order rolling blackouts.

The City of Healdsburg also announced on Facebook that it was directed by CAISO to begin rolling power outages but called them off shortly after 8 p.m. Tuesday. Healdsburg city officials could not be immediately reached for comment regarding the outages.

Alameda Municipal Power released a statement Wednesday explaining that shortly after CAISO’s level three power emergency, the Northern California Power Agency (NCPA) instructed them to begin “load shedding operations.” As a result, about 1,400 customers were without power for an hour Tuesday evening.

“In conjunction with NCPA working with the CAISO, we are working to clarify procedures to ensure unnecessary outages do not occur moving forward,” Alameda Municipal Power said in a statement.

NCPA is a conglomerate of 12 utility districts in northern California. Palo Alto, Healdsburg, and Alameda are member utilities. NCPA didn’t respond to a request for comment Wednesday.

The operators that issued rolling outages called them off shortly after it had begun. However, outages unrelated to the rolling blackouts left thousands of Californians without power Tuesday night due to the extreme heat.

The state sent out an emergency notification to millions of Californians Tuesday evening, warning them to conserve energy immediately to avoid rolling blackouts. Gov. Gavin Newsom said at a news conference Wednesday that the notifications were sent to 27 million Californians.

Mainzer said the notification, which Newsom ordered, resulted in a “significant amount of load reduction” of about 2,000 megawatts within a half hour.

“That significant response from California consumers to the Wireless Emergency Alert allowed us to restore our operating reserves and took us back from the edge of broader grid disturbance,” Mainzer told reporters.

CAISO issued a Flex Alert for the eighth consecutive day on Wednesday, urging residents to conserve energy between 4 p.m. and 9 p.m. to reduce stress on the grid. Mainzer said Wednesday’s peak demand forecast was projected to reach 51,243 megawatts.

High temperatures of over 100 are expected in many inland areas of the state through Friday and officials are still asking Californians to be prepared to conserve energy to reduce the chance of outages.