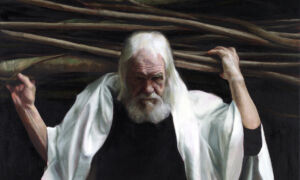 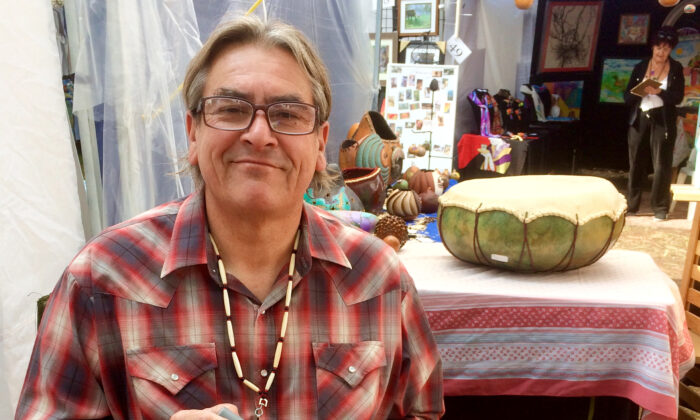 Rich Lopez is a pottery artist based in Beaumont, California. (Courtesy of Rich Lopez)
Southern California

“The first time I tried to end my life, I was driving on the freeway. I jumped lanes into oncoming traffic. A huge semi was coming right at me. At the last second, I swerved and ended up in a ditch,” he said while sitting in his home in Beaumont, California.

Lopez grew up in an abusive household, with a brother he says used him as a punching bag and a father who was scarred by World War II. “The school bus driver got tired of seeing me so badly beaten up by my dad and my brother—sometimes both—so he taught me how to box.

“I used to thank God for him every day. I had to learn to fight to be able to beat up my own brother … and learn to survive.”

Lopez said he wasn’t good to his own family—though he didn’t physically abuse them, his drug and alcohol abuse led him to mentally and emotionally abuse them.

Until he turned his life around some 20 years ago, with the help of a supportive wife, art, and what he sees as divine intervention.

Lopez, now 64, met his wife, Cheryl, when he was 16. Cheryl said she has loved Lopez since her sophomore year of high school.

“I remembered the night-school pottery classes we took as kids. I remembered how Rich loved working with the clay and the wheel,” she said. “I thought that maybe he could use it to help himself.”

She bought him a pottery wheel. “He was in such mental pain, and I didn’t know how to reach him.”

Cheryl’s seemingly small gesture led to an amazing transformation in her husband’s life. But not immediately. “For years, the wheel just sat there,” Cheryl said.

Lopez tried to stay clean and sober, and tried to hold onto his job as a wholesale coffee salesman, but always failed. Feeling that he and his family had had enough of him, Lopez decided for a second time to try ending his life.

“That second time I tried to commit suicide, that wasn’t an attempt—I died that day,” he said.

‘An Angel Had Taken Me’

The business Lopez worked for was being sold and he was losing his job with the sale.

“I was never taught how to cope with setbacks or anything negative, so one day, while no one was in the house, I drank two bottles—two full fifths of alcohol—and I downed a bottle of pills. The last thing I said was, ‘Let’s do this.’

“Suddenly, I wasn’t upstairs sprawled out on my bed anymore. An angel had taken me … to show me what was going to happen. He said, ‘You’re going to be a well-known artist.’

“He quieted me with a finger, brought me downstairs, and showed me the wheel that my wife had bought years before. He reminded me that I loved to work with pottery as a child.”

Ever the salesman, Lopez made a deal with the angel.

“He showed me the wheel, he showed me the sequence of events and how it would play out, and even the museum where I would have my own show, but I didn’t believe it. … I said, ‘If all of this is real, and I wake up … prove it to me. Let me wake up without a hangover.’”

Cheryl was not so amazed. “As soon as my wife came home that day, I said, ‘Honey, I’m done. I’ll never touch another drug or take another drink.’” But she had heard it before. “She laughed in my face.”

“I told Rich, ‘Show me, don’t tell me,’” Cheryl said. He did show her; the drugs and alcohol stopped immediately.

That was 20 years ago. He was about 400 pounds and he’s lost almost half his weight since then.

“My comeback … started the minute I sat down at the wheel. To me, the wheel is life itself playing out in front of me.”

That first night, Lopez sat at the wheel hour after hour, “throwing” a total of 200 pounds of clay. When he was finished, at nearly four in the morning, he had made figurines, bowls, pots, and dishes.

Lopez had somehow managed to recall the lessons from his gin-soaked, drug-infused meetings with ceramic masters.

“Somehow, I retained it all and never forgot a thing. Within months, I was selling my art at the Village Fest in Palm Springs.”

Still, Lopez’s wife and children were skeptical for a while. Years of broken promises, like broken pottery, littered the floor of Lopez’s life.

“I learned that life is like the clay: it’s in my hands … but I can’t force it, or I’ll destroy it. I had to learn to work slowly and use my very life as the persuasive proof that I had changed. I tell people that I don’t mold the clay into shape … I persuade it,” Lopez said.

His wife supported him financially, but “she couldn’t trust me. I understood why, but that realization was so painful.”

“I began to feel as if I was going to crumble, feeling like I would never be the artist I wanted to be … feeling that I had failed. I lost hope in my ability. I lost my confidence. I began to cry. It was right there at a show, at my booth, surrounded by all the other vendors. I just started to cry, and I felt disgusted with myself.

Enter angels numbers two and three. You see, in Rich Lopez’s world, angels look just like ordinary folks, and two of them approached his booth that day.

“They were an ordinary-looking couple, but I knew when I saw them. I felt it. She said to me ‘Why are you crying?’ I looked up, aggravated, and said, ‘Don’t worry about it.’ She said, ‘I’d like to buy that piece; it’s beautiful. And I’d like that piece.’”

She asked for another piece, then her husband asked for two more. “When I totaled it up, it came to $375.”

“I just looked up, tears in my eyes and said, ‘Are you two angels? You’re angels.’”

Cheryl returned to the booth and looked at Lopez “as if I was back on the stuff” when he said he just met two angels. “Then she looked at the check and said, ‘They spent $376?’ I said, ‘What? What?’ I looked at the check. The woman had made a mistake and had written out the check for $376. $376.”

“When I told my wife what had happened, we were both in shock. Every time we looked at the check, we just shook our heads. … My wife began to believe in me then.”

But it wasn’t a straight line from failure to success.

He felt stalled, a creative block. His friend and mentor Crispin Gonzalez, a pottery teacher at Chaffey College in Rancho Cucamonga, told him, “This is California. There are a thousand guys doing pretty bowls. … You have to find your own niche.”

Cue another dream, another angel.

“I had this dream: I saw myself hovering over baskets and holding a unique tool. An angel showed it to me. It was a tool that’s not made for the trade. I knew it didn’t exist in real life. I immediately woke up, took a steak knife, ran to my grinding wheel, and fashioned the tool that I now use to make the striations in the clay that mimic a woven basket,” he said.

“It works like no other ceramics tool ever invented.”

Things progressed quickly for Lopez after that. His work was featured at homes and galleries around the country, and one of his signature “woven baskets” now fetches as much as $2,000.

“I am half Indian, and I spent over a year on the reservation learning the art of basket weaving,” he said.

He had his own show at The American Museum of Ceramic Arts (AMOCA) in Pomona—the premier ceramics gallery west of the Mississippi and home to some of the country’s most exceptional ceramics exhibits.

It wasn’t until his second time at AMOCA, however, that it’s special significance dawned on him.

“When I walked in that second time, I began to cry. I realized that everything looked exactly as I remembered it in my first visit with the angel, when I almost died. I knew the walls … the floors, the steps, the furniture. I had been there before. I was too busy to realize it that first time … but suddenly I realized it,” he said.

“I began to shake and cry.”

Rich Lopez was beginning to establish himself as a major regional artist who was on the brink of national success when another ugly, dramatic hurdle emerged.

“I hadn’t been feeling right, but I never told my wife or anyone else. My eyesight was giving me problems … and the minute Cheryl would leave for work, I’d collapse on the bed from fatigue. The only time I’d get up was to vomit. Then I’d crawl out of bed two minutes before she came home, so she would think everything was all right,” he said.

After visiting her mother in Arizona for several days, Cheryl came home to find him in bed, and slurring his words. “All I could say was, ‘Call 9-1-1,’ then I blacked out.”

Doctors told Cheryl to be ready at any moment for a call telling her that Rich had passed away. The call never came.

“I was out of it for 48 hours. I hadn’t taken care of my diabetes, hadn’t taken the meds … and had not been drinking water as I should have. My liver and kidneys weren’t happy. Neither was Cheryl,” Lopez said.

“But I realized I wasn’t out of the woods. After two days of keeping quiet, I could no longer hide the fact that my vision was damaged. They knew something was up when I tried to pour myself a glass of water, and I spilled it all over myself.”

Lopez was blind in his left eye. Cheryl says she immediately felt a crushing sympathy for him, but that that was immediately followed by a feeling that, no matter what happened, her husband would overcome it.

“To me, even if he remained blind in that eye, it wasn’t going to stop him in any way, shape, or form. I knew he’d beat it.”

But Lopez wasn’t so sure. “I was pretty much devastated … and angry. I had already suffered from depression and anxiety on and off my whole life. I shut down. I stopped making art. I was miserable.

“But slowly I realized that my entire life was like one of those Etch A Sketch boards. Every time I had gotten too complacent, life came and scrambled the whole thing … like shaking that board … and every time it did, I re-imagined myself,” Lopez said.

“If I’m going to be a one-eyed potter … I’d better get started,” he told himself.

“At first, I was almost scared of the clay, but as I worked it, felt it in my hands, my muscle memory took over. I began to smile … then I cried. I was back.”

The first piece he created after coming to grips with his blindness was a hummingbird. “Because even in the most turbulent winds, a hummingbird finds stability and peace.”

He’s also proud of a program he created called Art Force, which teaches children the art of pottery through demonstration and allows them to create small pieces themselves.

“I sit at the wheel for hours on end. I tell the clay my story. It answers back … and I give thanks,” Lopez said. “When people see my work, they see a bit of me in every piece. I want them to see a part of themselves too: the best part.”

Portions of this article first appeared in the Hemet San-Jacinto Chronicle. Rich Lopez can be reached at RichLopezClayArtist.com