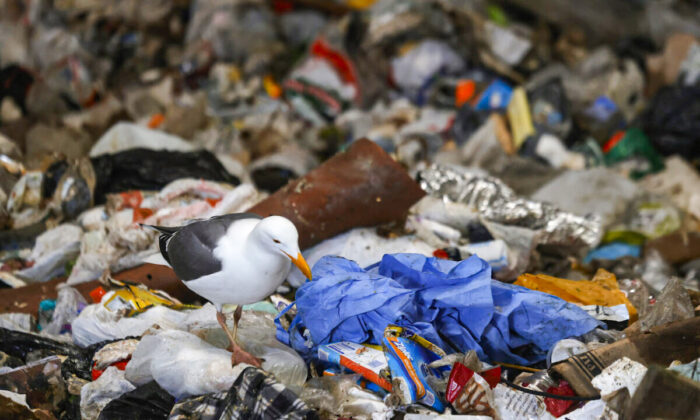 A seagull pecks at a discarded surgical gown in a trash pit at Recology in San Francisco, California, on April 2, 2021. (Justin Sullivan/Getty Images)
Northern California

“Our kids deserve a future free of plastic waste and all its dangerous impacts, everything from clogging our oceans to killing animals—contaminating the air we breathe, the water we drink, and the food we eat. No more,” Newsom said in a statement on Thursday.

Under the measure, SB 54, companies selling products that come with single-use plastic packaging, food containers, and utensils, will have a decade to cut down their use. Specifically, they’d have to reduce plastics in single-use products by 10 percent by 2027, and by 25 percent by 2032. The reduction in plastic packaging can be achieved via reducing package sizing, switching to a different material, or making the product easily reusable or refillable.

By 2032, all single-use plastic packaging in products bought or sold in the state would have to be recycled at a rate of at least 65 percent, per the new law. It sets interim requirements of at least 30 percent by 2028, and at least 40 percent by 2030. The requirement wouldn’t apply to plastic beverage bottles, which have their own recycling rates.

The new California law (pdf) also requires that non-recyclable expanded polystyrene, also known as styrofoam, will be reduced by 25 percent by 2025. If the goal is not met, the material will be totally banned. Because so little of the material is recycled, the measure is essentially a “de facto ban,” Jay Ziegler, the director of policy and external affairs at The Nature Conservancy in California told the Los Angeles Times.

The legislation will also require that plastic producers must form a “producer responsibility organization” tasked with developing a plan to meet the requirements of the new law. The plan would need approval from California’s recycling department, CalRecycle. Maine, Oregon, and Colorado have similar producer responsibility systems.

The organization must, starting in 2027, collect from producers $500 million annually for 10 years—totaling $5 billion over that period—for funds created by the legislation aimed at cutting plastic pollution and “mitigating the environmental impacts of plastic.”

Efforts to limit plastic packaging have failed in the state’s legislature for years, but the threat of a similar initiative (pdf) going before voters on the ballot in November faced intense opposition from business groups and prompted them to come to the negotiating table.

The measure’s three petitioners withdrew the pending initiative from the ballot after saying that they would do so if Newsom signed SB 54 into law (pdf).

State Sen. Ben Allen (D-Santa Monica), author of the legislation who led negotiations on the bill, expressed in a statement that the measure reflected the cooperation of the environmental and business communities on the issue.

The Nature Conservancy praised the new law, calling it “the nation’s most comprehensive and ambitious policy to reduce pollution from single-use plastic packaging and foodware.”

Joshua Baca, vice president of plastics of the American Chemistry Council, which represents the plastics industry, said the new law’s definition of recycling limits “new, innovative recycling technologies that keep hard to recycle plastic out of the environment and landfills.” He also expressed that the measure unfairly places an 8 percent cap on the amount of post-consumer recycled plastic that can be used to meet the 25 percent reduction requirement.

“We believe future legislation or regulations should incentivize the use of more post-consumer recycled content in plastic packaging,” he said in a statement.

Judith Enck, president of Beyond Plastics, said while California’s bill goes farther than any other state when it comes to reducing plastic pollution, it still falls short. She said it will only result in about a 10 percent reduction in overall packaging because producers can make products refillable or switch to other materials.

Plastic production is expected to triple globally by 2050, she added.