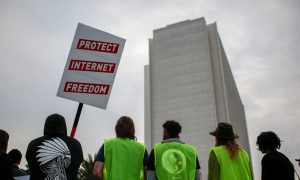 The California State Board of Education will decide the controversial framework no later than May. It is expected to impact the state’s public education in the coming decade.

However, as school districts carry out the revised curriculum based on AB 329, parents started feeling offended by the LGBQT content that includes promoting sex, and the language used that encourages children to challenge their parents on sexual conduct topics.

“I was horrified because of what they are teaching our children,” said Stephanie Yates, a mother of three and founder of IPOC. Yates said she could not mention what she knew about the curriculum because there were children present at the event.

It all started when Yates expressed her concerns on social media. Nine months later, thousands of people joined her group. “Even with Facebook blocking us and trying to stop that, it’s still growing, every day,” said Yates.

“Don’t mess with our kids,” said America Figueroa, a mother of five children. She is a pastor from Coachella Valley and an early childhood educator. Figueroa said the Latino community was not informed about the bill because the bill was only available in English.

“The State Board of Education is deciding whether or not it will engage open hostilities against parents,” said Kevin Snider, Chief Counsel of Pacific Justice Institute.

“I believe that we need to remind State officials that parents, the family remains the foundational civil institution upon which society is built,” said Snider. He pointed out that there are Californians who do not consent to the curriculums calculated to undermine the values, the faith, and the authority of the parents.

Paul Taylor, a former candidate for the U.S. Senate in the 2018 California primary elections, shared the protesters’ sentiment because he is worried about his two grandchildren.

“I want their parents, my son, to teach them about their moralities. I don’t want anyone intercepting them at the school level, with the teachers and trying to introduce things that we are against or impose upon us laws that take away our First Amendment rights of representation. As well as keeping our country according to what the founding fathers provided, which is called traditional family values,” Taylor said.

“When you take a young child, and you form their mind when they don’t have a chance to understand what it means, you [are] preprogrammed to a lifestyle that is contrary to their family and our historical family values. Then you are doing an assault on the innocent,” he said.

Ken Williams and Elizabeth Woning who formerly led a gay lifestyle and lesbian lifestyle, spoke at the rally and shared their personal experience of how they gave up their homosexual practices and built their family in the form of traditional marriage through the help of churches.

The protesters criticized two organizations, Planned Parenthood and the American Civil Liberty Union (ACLU), for being responsible for creating the sex education framework based on AB 329.