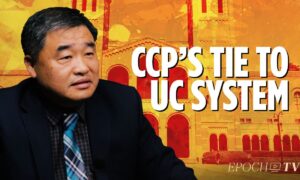 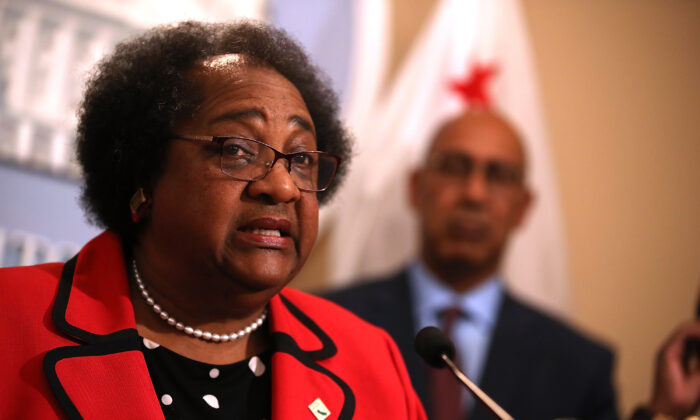 California Secretary of State Shirley Weber told a state-mandated Reparations Task Force last week that atonement for slavery is long overdue and should include free education from preschool to university for all African Americans.

“Education should be available to every African American, regardless of their background in terms of the resources they have. University of California should be free to every black person in California, period,” Weber told the task force on Sept. 24, the second day of the virtual hearing.

Not only should higher learning be free for black students, but it should begin earlier, according to Weber.

“I think you have to do those kinds of things that are bold,” she said. “Every black child in California that’s born should basically be going to preschool, because they have to catch up for themselves and their mother who didn’t go.”

Weber said she couldn’t put a price tag on the cost of reparations and that no monetary amount could compensate for the pain and suffering generations of the descendants of slaves have endured.

Commenting on the emotional testimony of one descendant at the hearing, Weber said, “The pain is real … and we try not to reflect that often on it because it is so extremely painful.”

Because the effects of chattel slavery on the black community run so deep, reparations will take generations to achieve and shouldn’t be limited to monetary compensation, she said.

“You can’t buy it with $20,000,” she said. “So, we have to look at every institution that we’ve had, whether it’s homeownership and finances, and begin to ask when will we reach equity and parity, and how do we accelerate that experience for so many?”

Weber served as a California assemblywoman before she was appointed secretary of state in January. She authored Assembly Bill 3121 to establish the Task Force to Study and Develop Reparation Proposals for African Americans on Sept. 30, 2020. On June 1, nine appointed members began the two year-process of drafting an apology to the descendants of slaves and recommending ways that the state might compensate them.

She noted that the University of California system no longer takes SAT scores into account in its admissions process, which will help make university education more attainable for black students.

“We should make it available to every one of our kids who wants to go to college and who can qualify, and most of them can because we know that the qualifications at the University of California have changed so dramatically,” Weber said.

“We now don’t require the SAT. We don’t require all those things we thought [were] the Holy Grail that we would never give up. We’ve given up all of that stuff, and we have not lost the quality, nor the expertise nor the stature of the University of California.”

A comprehensive reparations package “is not something that will happen in one year,” Weber said. “I’m hopeful that this commission will decide that there needs to be a statewide ongoing presence about reparations,” including legislation, assessment, and evaluation “to get us to a place where we need to be.”

“This 400-year challenge is not going to be solved in 400 days,” she said, referring to the transatlantic slave trade. “It’s going to take much more than that and a commitment from the state of California, the fifth-largest economy in the world to make it happen.”

Some nonprofit groups in San Diego are raising funds to help incentivize more black families to buy homes, thus building generational wealth working to close the racial equity gap between white families and them, she said.

In her personal testimony, Weber spoke about the devastating impact slavery has had on her own family.

Her father, David Nash, was a sharecropper in Hope, Arkansas, during the segregationist Jim Crow era.

Nash was forced to flee the South when he was threatened by a lynch mob for “demanding some sense of equity and fairness,” Weber said.

The family fled to California when she was 3 years old, where they continued to face racial discrimination, she said.

Her grandfather was a disciplinarian who was always “very fearful of white people.”

“I never could understand that as a kid,” Weber said of her grandfather. “I couldn’t understand it.”

As she grew older, Weber began to understand the reasons for his wary and “sometimes mean” disposition, she said.

Her family’s struggle inspired her to become a civil rights activist and politician. Determined to make a difference, Weber attended UCLA, where she received her bachelor’s, master’s, and doctoral degrees by the age of 26. Prior to receiving her doctorate, she became a professor at San Diego State University, where she retired from the Department of Africana Studies after 40 years as a faculty member and serving several terms as department chair.

California Sen. Steven Bradford (D-Gardena), a task force member, praised Weber for her efforts to establish the Reparations Task Force and for authoring Assembly Bill 101, which would require all high school students in the state to complete the California Dept. of Education’s Ethnic Studies Model Curriculum (ESMC) in order to graduate.

“I think it plays into the nexus of also ethnic studies with you to author that bill, because we heard a lot of folks this morning and yesterday say, ‘Well, I didn’t know the history because it hasn’t been taught.’ So, I want to thank you for ethnic studies as well,” Bradford said.

The Ethnic Studies Model Curriculum (ESMC) has come under heavy scrutiny from parents’ groups across California. Many parents and conservative groups claim that the program, which is based on the neo-Marxist concept of critical race theory, is divisive and harmful to students.

“Ethnic Studies is critical,” Weber said in response to Bradford.

AB 101 has passed the Assembly and Senate Floors, but California Gov. Gavin Newsom hadn’t signed the controversial bill as of Sept. 28.

Noting that he and Bradford are the chairs of the Assembly and Senate public safety committees, respectively, he asked Weber for her continued support.

“You do have two African American men in charge of public safety,” Jones-Sawyer said.

“Dr. Weber, we need to look at probably the last one of the last remaining plantations on this planet, which is our correctional system in our prison system. The prison plantation system is still harming thousands and thousands of our people.”

Jones-Sawyer cited Senate Bill 2 as a step toward such reforms.

“I know you still have some scars on your back from getting the police use of force bill through with SB 2 decertification. We all got scars on our backs … from doing what we needed to do to ensure that these laws were put in place,” he said.

Weber agreed with Jones-Sawyer about the need for penal system reform.

“There is no question that the penal system itself and how it has operated in this country is really an embarrassment to this nation. It should be,” she said. “No one has as large a prison population, as California had 180,000 people in prison when I became a member of the assembly.”

The state prison population is now at about 90,000, she said.

“We’ve cut it about in half, and people are upset about that. So therefore, you’re going to see more and more efforts to legislate or to create more crimes and more felonies than you had before to basically incarcerate more individuals,” Weber said.

“We have to begin to make sure that there is rehabilitation in our penal system. There’s no effort to try to do that.

“We also have to deal with our K to 12 system. That is the pipeline to prison.”