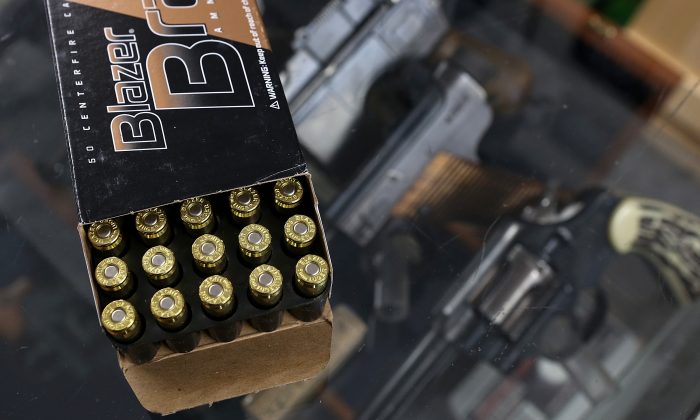 A box of 9mm bullets sits on the counter at Sportsmans Arms in Petaluma, Calif. on April 2, 2013. (Justin Sullivan/Getty Images)
Northern California

New California gun laws recently took effect via the 2016 ballot measure Proposition 63, which was passed by 63% of voters at the time. The law, which took effect on July 1, mandates that all individuals making firearm ammunition purchases go through a state background check.

Supporters of the new law hope it will protect the public by preventing ammo from getting into the hands of criminals.

The new rules require customers to go through a background check each time they purchase ammunition, paying up to $1 for the process each time. If the customer’s information isn’t already in the California Department of Justice’s system, they will have to pay an additional $20.

In addition, ammunition vendors will have to deny sales to individuals whose names are on a DOJ list of those prohibited from purchasing firearms.

The Epoch Times had the opportunity to speak with Rick Travis, the Executive Director of the California Rifle and Pistol Association (CRPA) on the issue and what the passage of this new law means for gun owners in the Golden State. The CRPA is the National Rifle Association’s (NRA) California branch.

“[This law] really has nothing to do with decreasing gun violence,” said Travis. “The left always likes to say that everything they are doing is for decreasing gun violence. It’s honestly just to further restrict the ownership enshrined in people’s second amendment rights. According to their own studies that came out of UC Davis that Sacramento paid for, none of the gun laws enacted have actually had any [effect] on gun violence in the state.”

Travis expressed his belief that the system being implemented by the state’s Department of Justice had a number of flaws.

Travis explained that this won’t harm criminals, only law-abiding citizens.

“Now a single mom that doesn’t live in the best area that has a forearm for home protection, you’ve just handed out a couple more layers, costs and provisions for her to defend herself,” he said. “These are obviously things that criminals aren’t going to do. Criminals aren’t going to go through a background check. They’re going to continue to go across state lines and other places to purchase ammo and do what they do because they don’t follow the law.”

Travis also pointed out that it not only effects gun owners, but also places an undue burden on firearms ammunition sellers.

“There is a myth that firearms stores and ammunition sellers are making millions of dollars. They have less of a margin that any other sporting goods store does as far as profitability. It’s already very tight. In most places, such as metropolitan Los Angeles, Orange County, San Francisco, Santa Barbara, places like that, it is extremely hard to even find the zoning. You do all that, you hire your staff, you have taxes, labor laws. It’s already extremely hard to run one. It used to take 10 minutes to process five different people trying to buy ammunition at the counter. Now it’s going to take 10-15 minutes per person. If you’re going to have to wait in line 45 minutes just to talk to me, you’re going to leave.”

When asked about California’s already strict gun laws and how far they will eventually go, Travis was not optimistic about the future of second amendment rights in the state, especially under the current Governor.

“Currently with the makeup for both the [legislature] and with Governor Newsom in there, I don’t think there is any law proposed that would further restrict the rights of the second amendment that Newsom wouldn’t sign into law. His predecessor, Governor Brown had the insight to realize some things could work. There were multiple bills that he vetoed. He told his Democratic counterparts ‘Stop it, this isn’t legal. It’s not right. [These bills] were reintroduced under the Newsom Administration and he has every plan on signing them. This is governmental overreach. I think their ultimate goal is to get rid of the second amendment in California.”

Travis told the Epoch Times of the legal suits that the CRPA has taken to Sacramento to counter multiple pieces of legislation that target firearms as well as their successes.

“We have a multi-pronged approach to this. When any of these bills get introduced, we are the only Second Amendment organization in the state of California that has multiple lobbyists that work solely for us up at the capitol building. We have local attorneys and part of our staff that [are constantly] arguing and defending. We have had great success because in most of those cases we are currently winning those lawsuits.”

Travis concluded with a warning about what he believed was of importance pertaining the second amendment.

“I think it’s really important that people understand something. If you look to countries who used to be under the former Soviet bloc, who have now put in their own second amendments because they’ve realized something precious. That is in places where there is no second amendment like laws, the rights of the first amendment get taken over by the government once that second amendment gets lost. That is why this isn’t a privilege. The framers clearly stated these were things they enumerated because they were given by their creator. These aren’t created by your fellow man.”

California, having some of the nation’s strictest gun laws is ranked 49th in gun freedoms by the Cato Institute’s Freedom in the Fifty States Index, just behind Hawaii, which is the strictest in the nation.