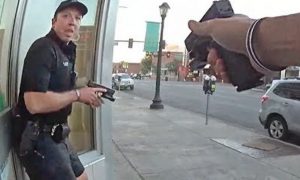 Authorities arrested a man suspected of shooting the security guard of a news crew that was robbed while covering the Oakland teachers strike, according to a statement by the CBS affiliate.

KPIX said a reporter and a photographer were gathering interviews on Feb. 24 about the strike at the Oakland Library when a car pulled up and the driver pulled a gun, demanding their camera. The crew surrendered the equipment and began walking away.

The suspect then shot the guard, Matt Meredith, in the leg, the news station said. KPIX reporter Joe Vazquez said on Twitter that the guard, a retired Berkeley police officer, exchanged gunfire.

An Alameda County Sheriff spokesman says a 21-year-old man with several gunshot wounds walked into a nearby hospital after the incident. Oakland police arrested the man on suspicion of shooting the news crew’s guard.

Assaults on routine assignments became so commonplace in recent years that some television stations have hired armed guards to ride with news crews.

No other information—including what time the robbery took place—was immediately released.

It’s not the first time the station has been the target of theft. In November 2012, a group of men punched a KPIX cameraman while he was filming in front of an Oakland high school and fled with his camera while it was still recording.

“We don’t know what the market is for these cameras,” San Francisco Police Sgt. Michael Andraychuk told The Associated Press in 2015. Even though the cameras can cost upward of $50,000 each, it is specialized equipment that can’t be easily sold on the black market, Andraychuk said, and none of the stolen cameras have turned up on Craigslist, eBay or any other online marketplace.

Man Killed in Shootout With California Officer Was Deported Thrice Before

Javier Hernandez-Morales, the 48-year-old illegal immigrant who was killed in a shootout with a police officer in California on Feb. 17, had been deported multiple times previously and was released despite Immigration and Customs Enforcement’s (ICE) objections.

In a statement provided to The Epoch Times, ICE described how Hernandez-Morales, a Mexican National residing illegally in the United States, had been deported three times prior to 2011.

After that year, ICE issued detainers on four separate occasions for Hernandez-Morales following his arrests for local crimes including driving under the influence, battery on a peace officer, selling liquor to a minor, and probation violations.

“None of the four detainers lodged were honored by local jails,” the statement said. “It’s unfortunate that our law enforcement partners and the community are subjected to dangerous consequences because of inflexible state laws that protect criminal aliens.”

Graphic footage of the encounter, released by the Napa County Sheriff Department on Feb. 20 showed Hernandez-Morales rolling down his window after being approached by Napa County sheriff’s Deputy Riley Jarecki.

Hernandez-Morales can be seen grabbing a handgun and firing some shots out before Jarecki ducks out of the way, runs to the other side of the car, and fires multiple shots into where Hernandez-Morales was sitting. Hernandez-Morales died at the scene, while Jarecki was not seriously injured. The shootout took place at the 1100 block of Henry Road in Napa.

ICE said they were grateful the deputy involved was not harmed during the attack but they argued it could have been prevented if they were notified of the multiple times Hernandez-Morales was released from local custody over the last few years.

“This is an impactful, scary example of how public safety is affected by laws or policies limiting local law enforcement agencies’ ability to cooperate with ICE,” the statement said.

California, a “sanctuary state”, has a law signed by Gov. Jerry Brown in 2017 that largely prohibits local police officers from keeping illegal immigrants in prison at the request of federal immigration officials.

Napa County Supervisor Belia Ramos said that the county has followed the state law since 2017.

“Compliance with state law is what Napa County will, in fact, follow through upon, whether there are changes in the future that change things but as of right now we do need to comply with state law and that is what our policy reflects,” Ramos told ABC 7.

Hernandez-Morales was a Napa resident and former farm worker. Undersheriff Jon Crawford said at a news conference that he had several aliases that had to be first investigated by the sheriff’s office before they could release his name.

The motive behind Hernandez-Morales’s shooting was unclear, but Crawford said he had a few arrest warrants at the time, saying that before the bodycam footage began the deputy had been talking with him for a few minutes already.