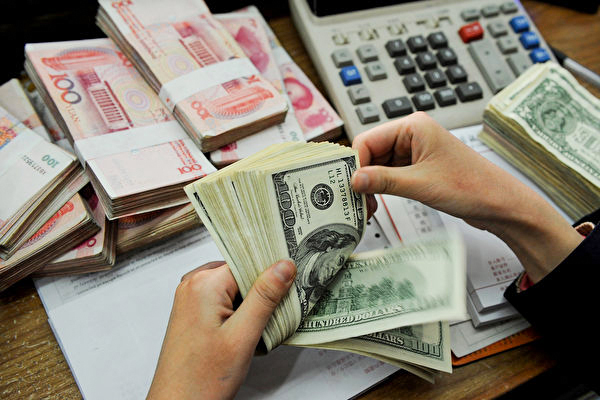 The Chinese Communist Party's draconian COVID measures have accelerated the outflow of wealthy Chinese residents and their capitals. This photo shows a bank teller counting stacks of US dollars and Chinese 100-yuan notes at a bank in Hefei, Anhui province, China. (STR/AFP/Getty Images)
China Business & Economy

The Chinese Communist Party’s (CCP) draconian COVID measures and economic policies have driven many wealthy Chinese residents to leave or at least plan to leave China. Many wealthy individuals have transferred their assets abroad through overseas investment, property purchases, or offshore trusts, with California and New York being their top destinations.

According to investment migration consultancy Henley & Partners, about 10,000 high-net-worth individuals (persons with assets exceeding $1 million) have left or are seeking to leave China this year, taking $48 billion worth of assets with them—the second-largest projected outflow of wealth and people after Russia.

A large portion of the outflowed Chinese capital appears to have landed in the United States.

A recent report from the National Association of Realtors (pdf) indicates that foreign buyers from China spent $6.1 billion, more than from any other foreign country, on U.S. homes from April 2021 to March this year.

Chinese buyers spent, on average, more than $1 million per transaction—the highest average among foreign purchases—up from the $710,400 average from the year before.

In addition, data from the U.S. Department of Agriculture shows that Chinese buyers control an increasing amount of U.S. farmland. According to the data, Chinese investors controlled 13,720 acres in the United States as of the end of 2010. That amount increased to 194,179 acres through Dec. 31, 2020.

As funds move overseas, so are the financial disputes between Chinese people and China-based companies.

In recent years, more and more Chinese people and China-based companies have filed lawsuits in the civil courts of New York, hoping to get help to enforce the judgments of Chinese courts that have failed to hold debtors accountable.

For instance, Shenzhen’s Yipiao Enterprise Management Consulting Co. filed a lawsuit on June 28 to the civil court in Manhattan, New York, asking it to confirm a 2014 judgment made by the Second Intermediate Court of Shanghai.

According to court records viewed by The Epoch Times, many such court filings have been made recently, such as the maritime shipping contract dispute between the White Periwinkle Shipping Company and Chongqing Red Dragonfly Oil Company. The plaintiff, the shipping company, filed the lawsuit in March this year in New York, asking the local judge to recognize and enforce judgments made by Chinese courts.

There is also a stock dispute case: Northeast Securities Co., Ltd. vs. Sichuan Hengkang Co., Ltd., where the plaintiff filed the suit with the Manhattan Civil Court in New York on July 7, seeking to recognize and enforce the judgment of China’s Jilin Court involving a debt amount of 500 million yuan ($74.5 million).

The reason behind these cross-border debt collection lawsuits is that both the Chinese defendants and the subpoena recipients now live in New York. Many Chinese high-net-worth families have chosen to settle in the megacity—the world’s financial center—after emigrating to the United States. In addition, almost all major banks and financial institutes have branches in New York, making the city a good place to start asset tracking.

Frank Fang and Hannah Cai contributed to this report.