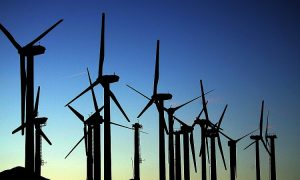 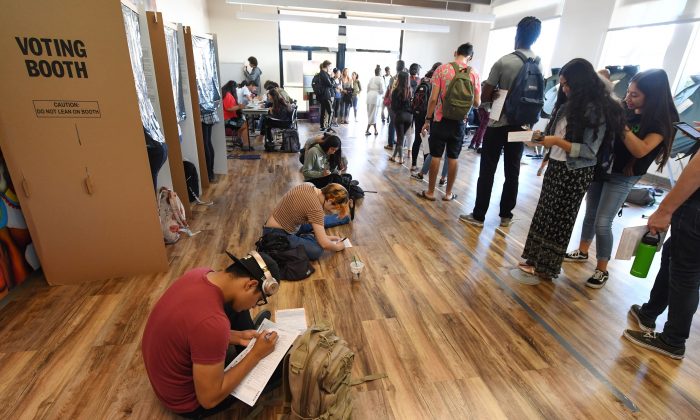 Students sitting on the floor of a polling station on the campus of the University of California, Irvine fill out provisional ballots as others wait in line to vote in Irvine, Calif. on Nov. 6, 2018. (ROBYN BECK/AFP/Getty Images)
Southern California

With 59.9 percent voting “yes” and 40.1 percent “no,” Proposition 7, the Permanent Daylight Saving Time Measure, authorizes California state legislature to set up the dates and times of the daylight saving time (DST).

It also allows California legislature to establish permanent, year-round DST with a two-thirds vote. However, before Californians really embrace a year-round DST, it needs to go through Congress and get permission to let California do so.

“The practice of switching our clocks originated from World War I as a means to save energy,” said Assemblymember Kansen Chu, one of the major legislative sponsor of the measure, in a statement. “Studies today illustrate that there is little to no energy savings. In reality, switching our clocks twice a year directly impacts our health, as well as leads to increased crime and traffic.”

Daylight Saving Time brings an additional risk to the road, and with dusk beginning as early as 5 p.m., drivers need to be extra vigilant for children and pedestrians. https://t.co/ewH0rTNyLL pic.twitter.com/T6JHTOj8Cv

In fact, the United States had tried permanent DST twice before. To save energy during World War II, President Roosevelt established “War Time”, a permanent DST that lasted from 1942 to 1945.

In 1973, as a result of the oil embargo from the Organization of Arab Petroleum Exporting Countries (OAPEC), Congress passed a trial period of year-round DST. But later the idea was dropped after safety concerns raised about children who have to commute in the dark during winter time.

Supporters of Prop. 7 argue that year-round DST could provide people with some health benefits.

“University medical studies in 2012 found that the risk of heart attacks increases by 10% in the two days following a time change,” an argument in favor of Prop. 7 read in the 2018 California Voter Guide.

“In 2016, further research revealed that stroke risks increase 8% when we change our clocks,” the argument continues, “For cancer patients, the stroke risk increases 25% and for people over age 65 stroke risk goes up 20%. All because we disrupt sleep patterns.”

However, opponents claim that it is inconvenient to get up in the dark during winter time. Furthermore, children would have to go to school or wait for school buses in the dark.

“First, if California wants it, the federal government is going to say ‘no’,” Sen. Hannah-Beth Jackson told the LA Times when the measure was qualified for the November Ballot, “Second, the system we have really does the best to accommodate people. Third, with so many critical issues facing this state—housing, healthcare, the gas tax—to dive into the pros and cons of this diminishes the importance of more substantive ballot measures.”