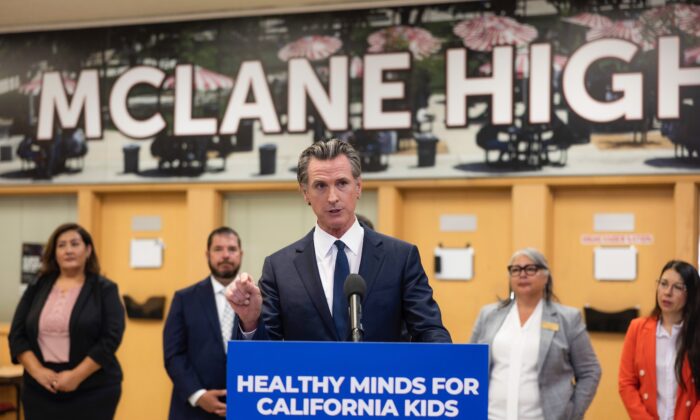 The California Senate passed Senate Bill 70 on Monday, moving closer to making kindergarten mandatory for all students in the state.

SB 70, passed by the Senate with a 33–5 vote, will require that a child complete one year at kindergarten before being admitted to first grade at a public elementary school. If signed into law, the bill will come into effect in the 2024–25 school year.

“As a public school teacher for 17 years, I have witnessed the detrimental impact on young students who miss out on fundamental early education,” state Sen. Susan Rubio, a Democrat who proposed the bill, said in an Aug. 29 press release.

“The voluntary participation for kindergarten leaves students unprepared for the educational environment they will encounter in elementary school,” she said.

The California State Assembly approved the bill earlier in August. SB 70 now heads to the desk of Gov. Gavin Newsom, who has yet to indicate whether he plans to sign it into law.

If enacted, California will become the 20th state in the United States to have a rule mandating kindergarten for children. Newsom has until Sept. 30 to either veto or approve the bill.

The kindergarten requirement can be fulfilled by a child who attends either private or public school. However, attendance at transitional kindergarten will not count as fulfilling the requirement.

The bill argues that kids who attend kindergarten are “more likely to go to college and earn higher wages” as well as less likely to experience poverty during adulthood.

The California Homeschool Network has opposed the bill, calling it an “unnecessary” mandate. The bill will force children to attend kindergarten irrespective of their social skills and make them go through 13 years of formal education rather than 12, it pointed out.

“Better education policy would consider both mastery and maturity, not chronological age,” the group said in a statement, according to the Los Angeles Times.

Lance Izumi, a senior director of the Center for Education at the Pacific Research Institute (PRI), argued that mandating kindergarten for a small minority of students who are not attending will not solve the “massive literacy and numeracy problems” of California.

Such requirements also do not take into account the individual needs of a child, he notes. Speaking to PRI, Lisa Disbrow, a longtime California teacher, said that the push for universal pre-K education is aimed at benefiting certain established interests.

“More students will need more supplies, and big government will have grown into the vision they share with Karl Marx when he stated, ‘The education of all children from the moment that they can get along without a mother’s care, shall be in state institutions’.”