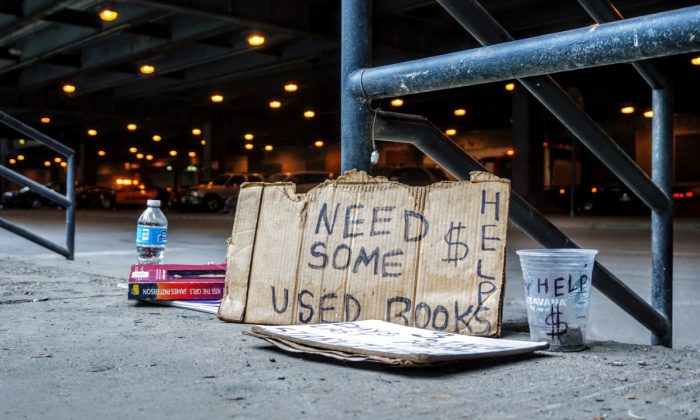 File photo of a cardboard sign similar to one used by panhandlers. (Maarten van den Heuvel/Unsplash)
US News

A California woman told NBCLA she was furious when she confronted a man asking for funeral donations for her son—who is not in the least dead.

She told the news outlet she caught the unidentified solicitor on video recently in Monrovia, holding a sign with a photo of her son and the words, “PLEASE HELP FUNERAL COST BROTHER PASSED.” The woman did not want her name revealed, nor that of her son, but she assured reporters he is still very much alive.

“Excuse me, you said your brother passed?” asks the woman in the video. “What happened to him?”

“Let me see,” the woman says and the solicitor flips over the sign to reveal her son’s photo. “Really? That’s your brother?” she asks, to which the man replies, “Yup.”

“How about that’s my son!” she retorts firmly.

The man then hopped on a bus and left the scene.

NBCLA posted the story on its Facebook page, where it garnered strong reactions.

“For a year there was a family, mom, dad, two year old and infant standing on the corner, asking for money,” one person commented. “Latter [sic] I was told somebody called social service. I was told they had a beautiful apartment dad said he made more money in one day for his family standing on the corner with his sign then working a minimum wage job for a week.”

“I have seen it many times,” commented another. “Taking up a collection for a funeral? Intersections in The Valley and other places as well. I was told years ago that they are scams so I have never donated.”

“I once saw like 5 guys around 19-22 years of age asking for donations for a baby’s funeral,” another person commented. “One of the guy’s eyes were glossy and looked high, plus he was holding the sign with the baby’s picture upside down.”

“There’s a guy in Phoenix that had been burying his son for the past 6 years,” a fourth commenter said, adding, “he’s been on the news and people made a FB group just to point him out and harass him.”

The Phoenix panhandler referred to in the above comment has been dubbed the “Help Bury My Son” guy—and has been the subject of numerous reports over the years.

Fox10 caught up with him in 2017 and asked about the backstory to the sign he was holding, which read “Help Bury My Son.”

The man claimed his son died from muscular dystrophy two weeks earlier, Fox10 reported. Documents reported on by the news outlet showed the man’s son did, indeed, pass away, but years earlier. His body was cremated in 2014, with Maricopa County covering the costs.

The panhandler denied that the county covered the costs of his son’s cremation and refused to answer why he was raising money.

“I asked him how long ago his son died and he said last week. I said, ‘how come you were out there five years ago?’, and he stated that he actually had a son that died five years ago as well,” Mack said, ABC15 reported. “So it was very obviously a lie. It was a blatant lie.”

Mack said some people criticized him after he posted the video to his personal Facebook page.

The news outlet posted the story on its Facebook page, where it sparked numerous strong reactions.

“I don’t read their signs, if I have extra change on me I will give without judging,” wrote one person. “This is the problem with the world everyone is always judging, and who are we to judge another? No one is perfect!!”

Another commenter posted a photo of himself standing beside a police officer, with the comment: “This me after I took his sign and ripped it. Charged with criminal damage but later dropped. Also he hasn’t been in the area since then.”

“It’s no ones [sic] business why this individual is panhandling,” commented another. “He is not the first nor the last. What he needs the money for is his business. Either give him a dollar or don’t. He isn’t up at anyone’s job asking why you are at the same dead end job barely making ends meet.”

The Facebook page set up to expose Johnson’s scam, called “STOP the ‘Help bury my son’ scam,” has over 6,300 members.

The description reads: “This scammer has been panhandling our streets for about 5 years now with his famous sign, ‘help bury my son’. He claims this is to help pay off a ‘loan’ for the burial even though there are records of the state paying for cremation. His sign has changed to also claim he’s collecting for an ‘aunt’ and has gone door to door begging for a ‘granddaughter killed by drunk driver’ as well. He has been known to be rude and cuss out people who have questioned his story. Post your daily sightings of him. *This page is not to encourage violence towards the man but we do want this scam to be well known and put to an end.”