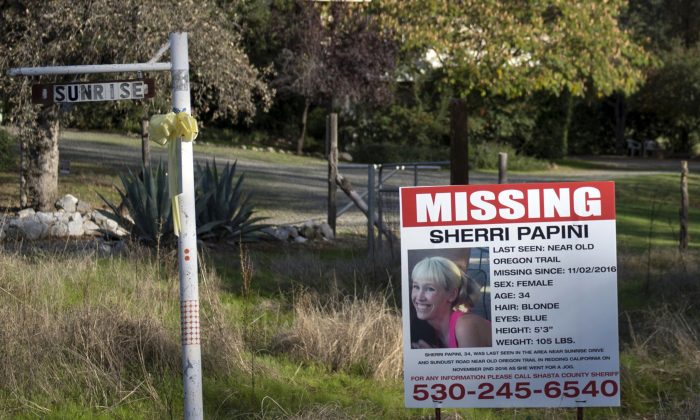 A "missing" sign for Mountain Gate, Calif., resident Sherri Papini, 34, is placed along side Sunrise Drive, near the location where the mom of two is believed to have gone missing while on a afternoon jog on Nov. 2. (Andrew Seng/The Sacramento Bee via AP, File)
Crime and Incidents

SAN FRANCISCO— The abductors of a California woman who was held captive for three weeks branded her with a message before she was dropped along the side of a freeway on Thanksgiving, a sheriff said Wednesday.

The suspects may have been trying to humiliate and wear down Sherri Papini by cutting off her long hair and branding her, Shasta County Sheriff Tom Bosenko told “Good Morning America”.

“I would think that that was some sort of either an exertion of power and control and/or maybe some type of message,” he said, emphasizing that the brand was a message, not a symbol.

The sheriff did not say where Papini had been branded and he did not provide further information about the investigation. Authorities are looking for two women.

The sheriff did not immediately return a call Wednesday from The Associated Press seeking further details.

Papini, the mother of two small children, disappeared while jogging Nov. 2 near her home in Redding, about 140 miles north of Sacramento. She was released along Interstate 5 near Sacramento.

Her husband Keith Papini has said his 34-year-old wife was covered with bruises and burns and was chained at the waist and wrists when she was found.

In a written statement Tuesday to “Good Morning America,” he also addressed social media chatter doubting his wife’s story of abduction and assault.

“Rumors, assumptions, lies, and hate have been both exhausting and disgusting,” he wrote.

The sheriff has said the case is puzzling for a number of reasons, including motive. He said no ransom demand was made and the Papinis are of modest means.

Bosenko told the AP on Monday that investigators have no reason to doubt the harrowing tale told by Sherri Papini.

Keith Papini said his wife weighed just 87 pounds and the bridge of her nose was broken when she was tossed from a vehicle along the interstate with her hands restrained and a bag over her head.

Bosenko said Sherri Papini was unable to recall any details about her abduction when first questioned soon after being found. He said victims of traumatic experiences sometimes suffer from memory loss regarding the events.

Authorities say the two suspects are possibly armed with a handgun and driving a dark colored SUV.