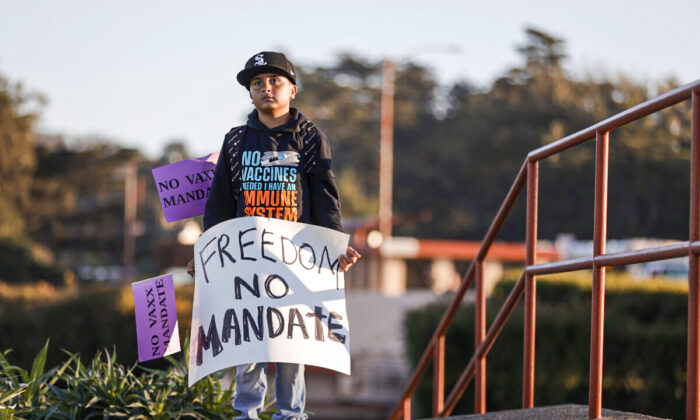 A young boy holds a sign during a rally against vaccine mandates at the Golden Gate Bridge in San Francisco, Calif. on Nov. 11, 2021. (Justin Sullivan/Getty Images)
Viewpoints

The U.S. Supreme Court ruled justly when it stated that businesses with more than 100 employees do not have to mandate taking vaccinations. Most Americans do not believe that businesses should be implementing mandates on their workers. And there are a significant number of individuals who are very uncomfortable about having to take the jab.

Four years ago, I introduced a rather novel bill. Now, in hindsight, it appears that it was rather profound. Senate Bill 1325 was titled “Peaceful and Natural Dignity Act: the right of self-quarantine.” It was meant to prepare for addressing a pandemic, and the title played on the theme.

The text now appears very prescient, as the bill, if passed, would have permitted an individual to exercise the right of self-quarantine in lieu of compliance with an otherwise mandatory medication. With a nanny state more determined to rule every aspect of our lives, in a “safety for all” mindset, providing an opt-out provision seemed most necessary.

SB 1325 would have protected the rights of families who, in times of crisis, would prefer to preserve their individual liberties and not be coerced into their medical care choices.

I guess my legislative efforts were premature. But it did have supporters.

Those opposed to the bill wanted to control the population during a pandemic.

I had opposed Sen. Richard Pan’s recent legislation, Senate Bill 277 (2016), mandating vaccines. It passed, despite thousands of California parents visiting the Capitol in Sacramento to register their dissent.

At the Senate Health Committee hearing when I presented my bill, Sen. Josh Newman thought that the act’s acronym, PANDA, was some sort of slight directed at fellow committee member Sen. Pan. He was rather rude in sharing his incorrect assumptions.

I felt that some form of legislation had to be introduced to provide a safe haven for those needing it, should the time ever come.

The Health Committee Chair, Sen. Ed Hernandez, would not permit my key witness to respond to Sen. Newman’s inappropriate charges.

The bill did not fare well. I couldn’t even get fellow Republican colleagues on the committee to vote for it.

Now, we’ve been in a pandemic for a couple of years and we’re fighting about the concern of being mandated to possibly take a medication (vaccination), just as SB 1325 addressed.

Fast forward and we have the recent and tragic demise of Orange County resident and former California State Assembly candidate Kelly Ernby. Many have publicly blasted her opposition to mandates. Sen. Pan, who is also a pediatrician and did not have Ernby as a patient, wrote on Twitter about his disdain for someone who fought for personal liberty and the freedom to choose whether they would take the jab or not.

Eric Weigand, a Newport Beach planning commissioner, recently pointed out in an editorial the Goldwater Rule, “under which it’s unethical for physicians to publicly comment on the health of politicians not their patients.”

One could make a legitimate case that the jab would address the COVID-19 spread, but those that have received the vaccinations and booster shots are also contracting this virus. We’ve come to the point where almost everyone has now had COVID, vaccinated or not, and they should rely on and appreciate their natural immunity. For someone to shame a nonvaccinated person for getting the coronavirus seems arrogant and controlling.

It’s time to act like mature adults. Life is about assessing risks, making decisions, and living with the consequences. Maybe it’s time to remember to be sensitive to the privacy of the medical status of individuals. Take your vitamins. Stay safe. Follow your conscience. Respect others. Implement the proper protocols. Get vaccinated if that is your wish. And self-quarantine when necessary.

Please don’t gloat that you’ve been vaccinated when you are still potentially fully susceptible to getting sick and can still transmit the virus. Shaming those who aren’t vaccinated due to their making a personal choice about their own bodies, something liberals diligently fight to the death over, is hypocritical at its worst and ignorant of the science and data at best.

Let’s hope, as this surge continues, that we can peacefully, and with natural dignity, get through this time in history with less acrimony. We should strive for herd immunity and not herd mentality.