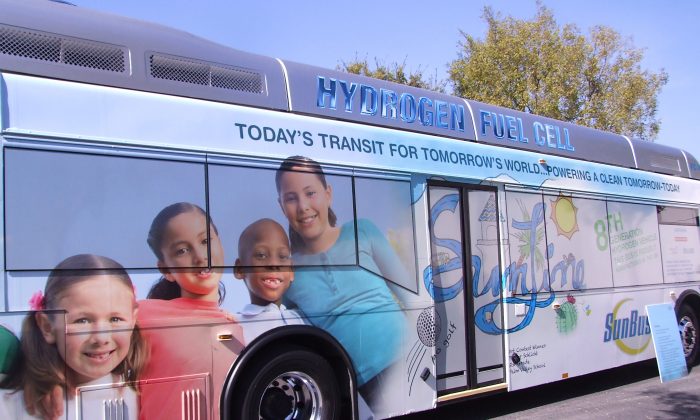 A Lightening electric motorcycle displayed at an Air Quality Resources Board event in San Dimas, Calif. on Oct. 23 gets up to 170 miles on a single charge. (Sarah Le/Epoch Times)
Environment

California May Cut Electric Vehicle Requirements for Some Manufactuers

As it is now, starting in 2018 the state will require vehicle manufacturers to offer a percentage of their vehicles sold in California to be ZEVs, like battery powered or hydrogen fuel cell electric vehicles. Some of that percentage could be substituted with near emission vehicles, like hybrid electric.

The Air Resources Board heard a recommendation from their staff on Thursday to allow intermediate car manufacturers to extend their compliance time from one to three years.

This would affect automakers like Mazda, Subaru, and Volvo that sell between 4,500 and 20,000 vehicles annually in California.

Staff also proposed lowering the required percentage of ZEVs medium-sized manufacturers produce between 2018 and 2025 by less than half. That would bring the requirement of 22 percent ZEVs by 2025 to 9.2 percent.

The board heard impassioned comments from both sides of the argument—organizations such as the California Clean Cars Coalition and the Los Angeles County Economic Development Corporation (LAEDC), along with representatives of car manufacturers all chimed in.

Ultimately, the Board moved to re-consider the recommendation at a later, undecided date. They also requested more data from staff members.

California and other members of an eight-state partnership, including New York, Oregon, Massachusetts, and Maryland have set a collective goal of putting 3.3 million zero-emission vehicles on U.S. roads by 2025. California alone hopes to have 1.5 million by that date.

Some are concerned that cutting manufacturers’ percentages will hurt this goal, however. In a letter to the Air Resources Board, a coalition of organizations including the Sierra Club and the American Lung Association, said the proposed change would lead to a shortfall of more than 25,000 zero-emission vehicles by 2025.

“Our concerns are rooted in the critical role that the ZEV program plays in reducing the immediate and long-term public health burdens caused by vehicle pollution and the need for the rapid transition to a zero emission vehicle fleet. We believe that the Board has the opportunity to send a clear message that California intends to stay the course,” stated the letter.

Bill Allen, President and CEO of the Los Angeles Economic Development Council also wrote a letter to the Air Resources Board saying that the Board needed to work closely with the automobile industry to understand its needs.

He said if the proposed changes were not put in place, “there is a very real risk that [auto makers] could experience negative impacts on their market activities in California, which could certainly affect employment and future business investment decisions, such as whether to be headquartered here.”

He reminded the Board that it also has a duty “to design emissions reduction measures in a manner that both minimizes costs and maximizes benefits for California’s economy.”

Members of the board said they needed to consider what was realistic for manufacturers but were fully committed to supporting the adoption of clean-air vehicles.

“Our climate can not afford the internal combustion engine anymore,” said Alberto Ayala, deputy executive officer of the California Air Resources Board.

“It is a transformative time, because for the sake of our planet and our environment and our public health, we do need to make the transition to zero-emission vehicles. And the good news is we know the technology is here.”