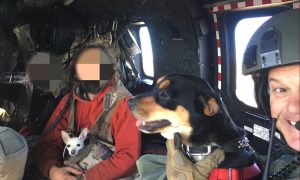 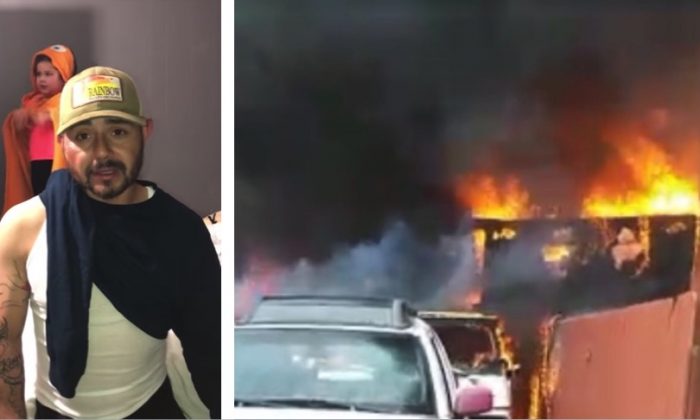 Jose Guzman (L), the man who saved his pit bull from a burning house, thanks GoFundMe donors in the wake of the incident. Guzman's house (R) on fire in San Diego, Calif., on March 9, 2019. (Roxana Martinez/YouTube/GoFundMe)
US News

A California man risked his life and suffered injuries when he rushed past fire crews into a burning house to save his dog.

Firefighters were hosing down a property engulfed in flames in Pala, San Diego, on March 9, when a frantic Jose Guzman rushed onto the scene—his house on fire.

Shocking footage published by KUSI shows Guzman sprint past the fire crew—hesitate for a moment—and then disappear behind a wall of smoke and flames.

This shocking cellphone video captures Jose Guzman rushing past firefighters and into his burning home looking frantically for his dog. Just moments later, both of them run out.

As the firemen huddle, apparently discussing whether to go in after him, Guzman emerges with his beloved pit bull, about 30 seconds after charging into the flames.

Video shows Guzman leading the dog to safety. As he walks by the camera, he checks his arm for burns.

“Ow!” Guzman calls out as he looks at his arm, while someone says “Hey, he got hurt, man!”

Astonished neighbors and onlookers are seen standing outside, with someone expressing shock at Guzman’s actions.

“He [expletive] rescued his dog, he went in for that …” someone says as the footage cuts off.

‘I Couldn’t Leave Her’

Guzman told People he didn’t think about the danger to his life, he just wanted to save his beloved pit bull, Gabbana.

“I knew something could’ve happened to me or both of us, but it didn’t go through my mind at the time,” Guzman told People. “That dog is part of my family. She’s been with us through downs and ups and I couldn’t leave her there. I would do it again if I had to; I would do it for anybody in my family.”

Guzman said he and his family were at a barbeque at his parents’ house when it came to his attention there was a fire in his neighborhood.

“I didn’t think it was mine because we had just left the house about an hour ago, but I decided to get in my truck and drive over there,” Guzman said.

The father of three knew Gabanna was still inside the house, and he leaped into action.

“I wasn’t gonna let her die like that,” he told People.

He told ABC10 News: “When I ran through the curtain of fire where my van was and fence, I didn’t know what was behind that.”

“I ran through the curtain of fire and made my way through the smoke to the back of the house, where I had her chained up,” he told People. “It was hard for me to get her leash unhooked, but I managed to get her loose and we both ran out towards the driveway.”

His landlord’s son-in-law, Adam Guzman, unrelated to Jose, captured the “very emotional” scene on video. He told People he thought the incident would end tragically.

“I thought he’s a goner. The flames were hot and I couldn’t imagine running through those flames. That was it, that was the last time I’d see him,” he told PEOPLE. “When he came running out with the dog, it was a big relief that he was alive and brought out the dog at the same time.”

Guzman suffered second-degree burns to his face, right side, arm, and left ear, according to the report.

He said Gabanna had burns to her nose and paw.

His home, possessions, and two cars were lost in the fire, he said.

He and his family have been living with his sister Roxana Martinez, who set up a GoFundMe page to help them out.

Martinez posted a video on YouTube, with Guzman thanking people for contributions.

“I am here right now at my sister’s house because this is the only place I could go, I had nothing else, I lost everything,” Guzman says in the video.

Guzman’s fiancée and mother of his three children, Adriana Lopez, told People she wasn’t surprised by his heroic actions.

“He’s that person that would do that for anybody,” said Lopez. “He’s a loving dad, a loving son, a loving brother.”

“This is not out of character for him, this is something that he would do. He’s always been very spontaneous and very caring, and he would give his life for anyone,” said his sister.