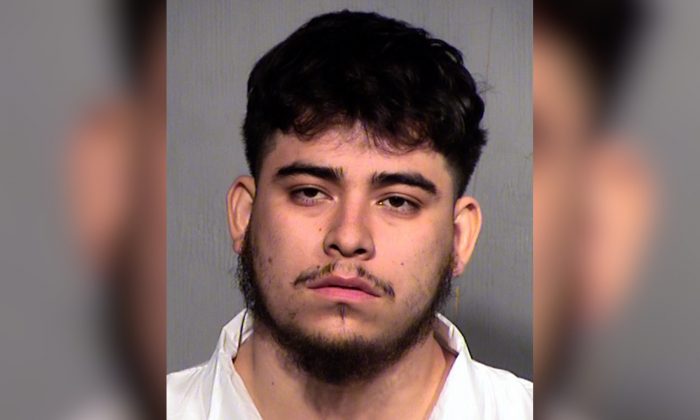 A man from Glendale, California, is facing two charges of first-degree murder after he allegedly killed his girlfriend and her 4-year-old daughter on June 30.

The suspect, 24-year-old Brandon Andres Bautista Torres, attempted to tell police officers an intruder broke into the home near 59th Avenue and Bethany Home Road and shot them a day before the girl’s fifth birthday, according to court documents.

The suspect, Brandon Andres Bautista Torres, is suspected of killing the woman and her child in their Glendale home Sunday, police said. https://t.co/jSXUuAj1XY

Three hours after the incident, Torres phoned police while driving back to the scene with his 1-year-old-son from his parent’s home in Surprise, saying a homeless man broke into the property, told them to freeze, and killed the pair.

The victims, a 23-year-old woman and her 4-year-old daughter, were dead by the time officers arrived. They were found in the master bedroom on the bed, police said.

When questioned by police, Torres said he fled the property with his son to his parents’ home, fearing that the mystery man would return with more people, reported 12 News. He told police he lay a sheet over the pair before he left the victims’ home.

Torres also told police he was afraid officers would assume he was the criminal because he is Hispanic, adding that he had seen ICE raids before.

The suspect told a friend a homeless man broke into the property and they both ended up struggling for a gun, according to court papers.

Police failed to find signs of struggle or forced entry into the home, and when they arrived, the side and front doors were locked, reported Azcentral.

Court documents say that when Torres first arrived at his parents’ home with his son, he failed to mention the murders and told them he was going to see a movie with his girlfriend and her daughter, reported Fox 10 Phoenix.

He then went to a friend’s house before returning to his parents’ home, when he told them his girlfriend and daughter had been shot. Torres’s sister later reported the incident to police.

Torres was also described as abusive by his girlfriend’s friend, who said he had put a gun to her head prior to the fatal incident, a police report said, according to Azcentral.

The 24-year-old is scheduled for a preliminary hearing in court on July 11.

A separate shooting last month led to the deaths of two Texas men, who died after an off-roading double date ended in an apparent murder-suicide, according to officials.

A day before his 28th birthday, Austin Smith was shot dead by 32-year-old Coby Rigsby after the night turned violent. Rigsby then shot himself, said authorities.
The group of four were driving their four-wheelers through mud on June 29 before the pair returned to Rigsby’s home and started arguing, reported ABC 13 Houston.

Houston police officers responded to reports of a shooting in northeast Harris County, in the 3600 block of Kennington Court in the Idleloch subdivision, at around 3:15 a.m. on June 30.

When deputies arrived at the residence, they found the 27-year-old dead from shotgun wounds in a driveway near his parked pickup truck, trailer, and four-wheeler, the outlet reported.

Speaking to police, the victim’s girlfriend said they had been “mudding” on a double date, when Smith allegedly attempted to step in and break up an argument between Rigsby and his girlfriend, before Smith and Rigsby broke into a street fight in front of the home.

The 32-year-old reportedly then went to get a gun, prompting Smith and the two women to flee the premises.

When Smith later returned to the property with his girlfriend to pick up his vehicle, he was fatally shot by Rigsby, according to Patch.

Neighbors tried to save Smith’s life by performing CPR for 20 minutes, but he sadly died at the scene.

Later, when deputies attempted to contact Rigsby, he pulled the trigger on himself inside his home, where he was found dead.

The incident is currently under investigation by Harris County Sheriff’s Office Homicide, according to ABC’s report.

Anyone with more information related to the incident is urged to get in touch with the Homicide Unit at 713-274-9100.